Europe- from Jurassic Park to Disneyland?

What next for Europe?

Walter Laqueur has recently written a book titled “The Last Days of Europe, Epitaph for an Old Continent”. It says:
“Given the shrinking of its population, it is possible that Europe, or at least considerable parts of it, will turn into a cultural theme park, a kind of Disneyland on a level of a certain sophistication for well-to-do visitors from China and India…..What appears impossible is that the 21st century will be the European century, as some observers, mainly in the United States, claimed even a few years ago.”

Europe inflicted unprecedented pain on world through its empires and wars until mid-20th century. White European man has arguably been the cruelest beast to walk upon this planet. 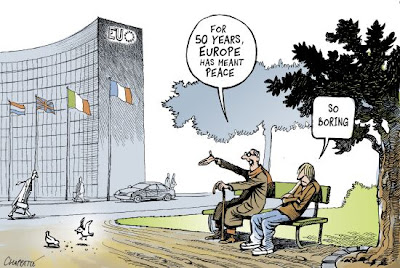