The New Yorker's regular contributor and writer, Adam Gopnik on learning language from his son, Luke:

"...And so now every night, the last thing we do, me from my bedroom and Luke from his, is to send each other an instant message, and we always end it “LOL.”


And it doesn’t matter what it means. It means laughter or love, or whatever it might mean at that moment to us."

“Essay-level writing as a basic skill is no longer the norm. Speaking is, however, and that style has influenced our writing. Get over it, grammarians...”


George Orwell wrote a famous essay 'Politics and the English Language' in April 1946. It's probably one of the most quoted document on the subject of language.

Will Self says about it:

"...Orwell's essay, Politics and the English Language, is frequently cited as a manifesto of plainspoken common sense - a principled assault upon all the jargon, obfuscation, and pretentiously Frenchified folderol that deforms our noble tongue. Orwell - it's said by these disciples - established once and for all in this essay that anything worth saying in English can be set down with perfect clarity such that it's comprehensible to all averagely intelligent English readers.The only problem with this is that it's not true - and furthermore, Orwell was plain wrong...

As for most people who bother with the matter admitting that English is in a bad way - hardly. Since 1946, when Orwell's essay was published, English has continued to grow and mutate, a great voracious beast of a tongue, snaffling up vocabulary, locutions and syntactical forms from the other languages it feeds on. There are more ways of saying more things in English than ever, and it follows perfectly logically that more people are shaping this versatile instrument for their purposes.

The trouble for the George Orwells of this world is that they don't like the ways in which our tongue is being shaped. In this respect they're indeed small "c" conservatives, who would rather peer at meaning by the guttering candlelight of a Standard English frozen in time, than have it brightly illumined by the high-wattage of the living, changing language.

Orwell and his supporters may say they're objecting to jargon and pretension, but underlying this are good old-fashioned prejudices against difference itself. Only homogenous groups of people all speak and write identically. People from different heritages, ethnicities, classes and regions speak the same language differently, duh!..."

(according to  J.T. Molesworth's dictionary: नेटके= Neat, handsome and according to Google Translate it means compact.)

( Compact/ neat/ handsome/precise writing and speaking are the fundamental skills of a language. Often they are ignored and the language gets used loosely. To facilitate school going kids to appreciate and accurately  learn Marathi, Madhuri Purandare has developed the 'Lihave Netake' book-set.)

Ms. Purandare elaborates her experience of  how a class of school teachers studied these books here.


The key sentence there is what teachers felt as they studied the books :

How can nameplates of shops be incorrect? A shop keeper is running a business and as long as she is achieving her business goals, her nameplate is OK.

Personally I haven't seen a single incorrect nameplate on a shop in Maharashtra. However, occasionally, I have felt and experienced the arrogance, stupidity and the absence of mercantile mentality behind those nameplates.

If TV news is 'erroneous', most likely it is MEANT to mislead or misinform or not give the complete picture. That is the problem of the medium and not the language. Most of the time Marathi TV news is 'bad' and not because of the language they use but because what they choose as news and the way they report it.

In short, Ms. Purandare's books sound like pedantry and Orwellian conservatism to me.

I wish to quote Oliver Kamm on the subject.

"There Is No ‘Proper English’...Pedantry is poor manners, certainly, but also poor scholarship. If someone tells you that you “can’t” write something, ask them why not. Rarely will they have an answer that makes grammatical sense; it is probably just a superstition that they have carried around with them for years."

"Language sticklers typically depict themselves as defenders of tradition against the insidious forces of cultural relativism. This is nonsense. In fact, the pedantic urge is a modern invention of rather dubious lineage. Prescriptive style guides like Strunk and White’s “Elements of Style” are the direct descendants of 18th-century grammarians who first defined what it was to speak “proper English.” In fact, these grammarians really just meant the dialect that grew up in and around London; their manuals were intended to teach propriety to an emerging merchant class."

I feel the most important issues facing Marathi are summed up in the quotes of the late Vilas Sarang at the top of this post and, maybe, just maybe, excessive pedantry among Marathi speaking people is partly responsible for them.


Emoji are the ideograms or smileys used in Japanese electronic messages and Web pages, the use of which is spreading outside Japan. What if they start appearing in Marathi texts? Will they annoy students of Ms. Purandare's book? 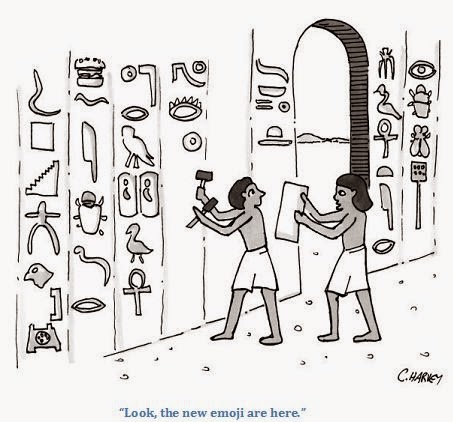 After I published the post, I learned on May 5 2015 that "Microsoft plans to introduce a range of new emoji with Windows 10 including a controversial 'middle finger' hand sign.".

I wonder where this will fit in 'neat Marathi'. 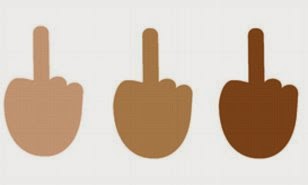 Posted by Aniruddha G. Kulkarni at 6:30 AM 6 comments: