They say Barbie, born 1959, with her long legs, love of pink-tinged glamour, and hair made for combing, was a world away from the baby-like creatures cradled by girls of previous generations.

A world away in Miraj India, I probably never had a doll of my own. But I recall some of the dolls my younger sister had.

The following description fitted them all except one.

(Small is my doll
Large is her shadow
Rotates her light-coloured eyes
turns her short nose up
inflates het puffy cheeks...)

Now nothing of this description fits Barbie except perhaps the shadow part.

I said all of my sister's dolls except one because around 1970 a doll entered our home who was nattily dressed and had sharp features. She was a wind-up doll busy pouring wine in a glass and drinking it. We called her pour-gulp doll (ओतते-पिते बाहुली).

She was a special lady, in many ways like Barbie.

At our home, she never shared physical space with other Kakubai (काकुबाई) dolls. She 'lived' for many years before she was broken by my sister.

That remained my only brush with Barbie until 1990's.

I don't know when Barbies were first imported in India. Were they ever smuggled in heydays of Indian smuggling? 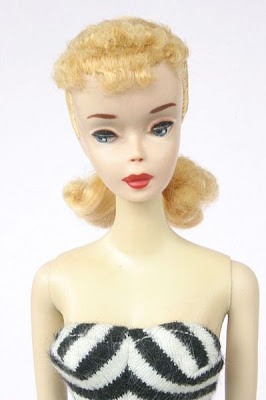