Not with a Whimper but a Bang

The poem ends with following much quoted and copied words:

This blog has already visited starless sky on October 2, 2007. Read it here
I Should Learn to Look at an Empty Sky unless……..

(Please note I took some liberties with that post because “What will the scientists of the future see as they peer into the skies 100 billion years from now? Without telescopes, they will see pretty much what we see today: the stars of our galaxy. The largest and brightest stars will have burned up their nuclear fuel, but plenty of smaller stars will still light up the night sky. The big difference will occur when these future scientists build telescopes capable of detecting galaxies outside our own. They won’t see any!”)

Authors Lawrence M. Krauss and Robert J. Scherrer claim:
“…Thus, observers of the future are likely to predict that the universe ultimately ends with a localized big crunch, rather than the eternal expansion that the cosmological constant produces. Instead of a whimper, their limited universe will end with a bang…”

Ironically, according to Wikipedia, when asked if he would write these lines again, Eliot said ‘no’:

“One reason is that while the association of the H-bomb is irrelevant to it, it would today come to everyone's mind. Another is that he is not sure the world will end with either…” 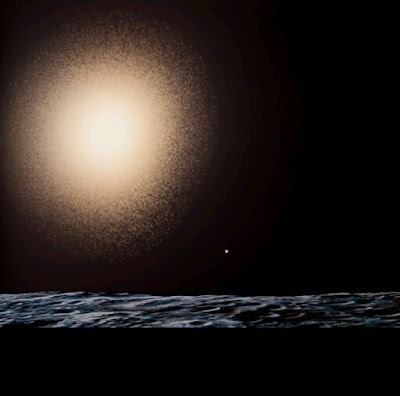 100 billion years in the future |
Successor to the Milky Way is a ball-like supergalaxy. Earth floats forlornly through its distant outskirts. Other galaxies, moving away from us faster than light, have disappeared from view.