Capitalism has given way to Corporate Bureaucracy 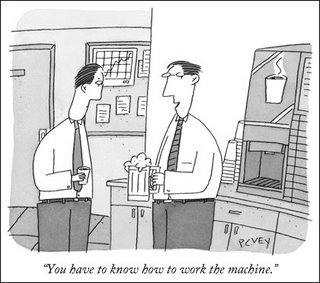 "The dominant role of the corporation in modern society is one such form of innocent fraud, and he (John Kenneth Galbraith in "The Economics of Innocent Fraud: Truth For Our Time") explains how managers hold the real power in our system, not consumers or shareholders as the image would suggest. Despite the "appearance of relevance for owners," capitalism has given way to corporate bureaucracy--"a bureaucracy in control of its task and its compensation. Rewards that verge on larceny."

Most corporates agree with Galbraith's argument than the other way round. They are nothing but big bureaucracies. You have to know your way through the labyrinth to get anything done.

Worse, machines have joined men in this. If you know the levers, even your coffee-only vending machine can dish out beer for you!
Posted by Aniruddha G. Kulkarni at 5:20 PM No comments: Links to this post

Path to progress is sprinkled with blood 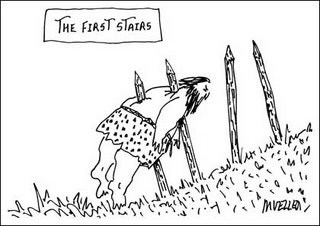 Every word was a poem once. Every step by a bipedal man a rhythmic dance. But probably no one died attempting them.

Not all inventors were that fortunate.

Here is one of the first inventor-martyr. We salute him.

Posted by Aniruddha G. Kulkarni at 5:11 PM No comments: Links to this post

Who is looking surprised? 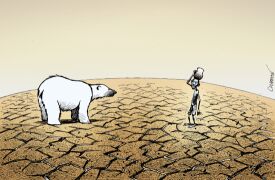 Climate change is upon us. We all know it.

Every summer is hotter, every monsoon weirder, every winter more elusive. It has been a long time since dawn of first day of Diwali was cold.

We are told pole caps are melting. Seas are rising. Some day, polar bear is likely to stray into a parched field of a third world country of Asia or Africa. Who will be more surprised? Labourer or bear?

Let us not look surprised. With our ultra-individualized existence. Big and bigger cars and houses. Air conditioners and more conspicuous consumption. We know it.
Posted by Aniruddha G. Kulkarni at 3:46 PM No comments: Links to this post 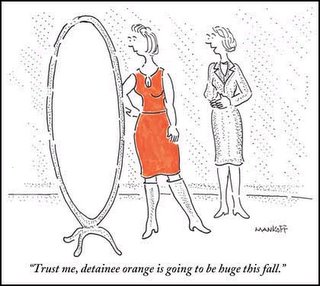 Guantánamo Bay is one of the darkest chapter in America's war on terrorism. The use of Guantánamo Bay as a military prison has drawn fire from Human rights organizations and other critics, who cite reports that detainees have been tortured or otherwise poorly treated. Amnesty International has called the situation "a human rights scandal" in a series of reports.

But who knew it has triggered a fashion wave? What is it called? Detainee Orange!
Posted by Aniruddha G. Kulkarni at 3:32 PM No comments: Links to this post

Outsourcing has got under skin of the West. The subject has reached drawing rooms, restaurants, bedrooms, parliaments, courts and so on.

But no one saw it reaching heaven and even there it is not a very easy subject.

Wings are manufactured in hell as labour is cheaper there. Notice arrow on carton showing which way is up.

There is an apparent calm in the picture. It may not be always so.

NYT of Dec 24 2006 has an article "Goodbye, Production (and Maybe Innovation)" which says:

"AMERICAN manufacturers no longer make subway cars. They are imported now, and the skills required to make them are disappearing in the United States. Similarly, imports are an ever-bigger source of refrigerators, household furnishings, auto and aircraft parts, machine tools and a host of everyday consumer products much in demand in America, but increasingly not made here.
Import penetration, as it is called, worried economists and policymakers when it first became noticeable 20 years ago. Many considered factory production a crucial component of the nation’s wealth and power. As imports gained ground, however, that view changed; the experts shifted the emphasis from production to design and innovation. Let others produce what Americans think up.
Or as Mark Zandi, chief economist at Moody’s Economy.com, put it: “We want people who can design iPods, not make them.” But over the long run, can invention and design be separated from production?
“Most innovation does not come from some disembodied laboratory,” said Stephen S. Cohen, co-director of the Berkeley Roundtable on the International Economy at the University of California, Berkeley. “In order to innovate in what you make, you have to be pretty good at making it — and we are losing that ability.”"

Heaven cannot wait! It has to do something about it but doesn't know what.
Posted by Aniruddha G. Kulkarni at 3:13 PM No comments: Links to this post

Who is responsible for Iraq? 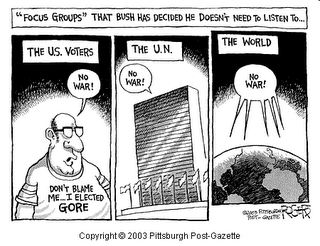 Iraq is a defining moment of our life time. It will reverberate for a long time, the way Vietnam war and Indian partition still do.

No American voter because he/she voted for Gore. Remember, Gore won popular vote in 2000.
No UN because it never approved of the war.

And no most of the world except Britain.

So who?
Posted by Aniruddha G. Kulkarni at 2:47 PM No comments: Links to this post 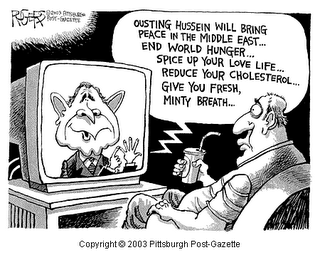 Politicians can go to any length selling us dreams. This is how George Bush sold Iraq war to Americans. It will give you fresh minty breath. What else?

Indian lot may even do better. They may promise moksha to our forefathers- the reason Ganges was brought down by Bhagirath from Shiva's hair.

Posted by Aniruddha G. Kulkarni at 2:35 PM No comments: Links to this post 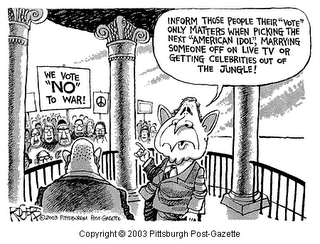 This is first among surely many on TV.

Great thing about democracy is, it leads rulers like George Bush to confuse between "vulgar and prurient and dumb interests" like following those TV programs and "aesthetic and noble interests" like defeating him through ballot box.

Posted by Aniruddha G. Kulkarni at 2:17 PM No comments: Links to this post