Why It's Hard to Compare Dnyaneshwar With Socrates... तो गुण म्हणजे त्यांचे मार्दव

"...but the virtue of Dnyandev by which I am more fascinated than the rest of his virtues is his leniency, his humility, his non-violence. In this regard, I don't quite understand who to compare him to. Socrates's compassion, peace, non-violence are well-known but he could  humour that could hurt other people..."

The Economist, December 17 2009, "Socrates in America/ Arguing to death" says:

"...The trouble was that, although his students, including Plato and Xenophon, who passed on Socrates’s conversations for posterity, saw him as noble, much of Athens did not. Instead, many Athenians detected an underlying arrogance in Socratic irony. Socrates thus resembled, say, the wiser-than-thou and often manipulative comedian-commentators Jon Stewart and Stephen Colbert in today’s America. Those who agreed with him found him funny and enlightening. The rest found him merely condescending."

"...Ah well, this praising of comedy at the expense of tragedy has gone on forever. Let us go back to Greece, before Muhammad, before Christ, and let someone else have the last word. In Plato's Symposium, Aristodemus, a bit pissed, has just woken up to find "… there remained awake only Aristophanes, Agathon and Socrates, who were drinking out of a large goblet that was passed around, while Socrates was discoursing to them. Aristodemus did not hear all the discourse, for he was only half awake; but he remembered Socrates insisting to the other two that the genius of comedy was the same as that of tragedy, and that the writer of the one should also be a writer of the other. To this they were compelled to assent, being sleepy, and not quite understanding what he meant. And first Aristophanes fell asleep, and then, when the day was dawning, Agathon."..." 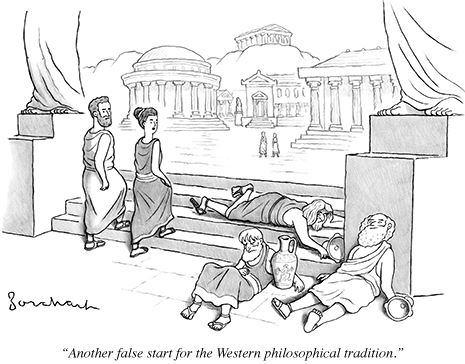 Now there must be four of them- Aristodemus, Aristophanes, Agathon and Socrates. We see only three (Socrates sitting extreme right with an empty chalice in hand). Spot the fourth!

After seeing the picture, it's even harder to compare Dnyaneshwar with Socrates!