Nizam STILL has the Last Laugh

"Despite all the patriotic American nonsense about the "greatest generation", (Antony) Beevor shows that there were remarkably few heroes. There were rarely "more than a handful of men prepared to take risks and attack," he says; most men just wanted to get home in one piece and "somebody else to play the role of hero". Surveys showed that if a few broke ranks and fled, the rest would follow; in most engagements, as many as half never fired a shot."


So who is more successful? Those who sacrifice or  those who survive?

Most Maratha chieftains who fled from the battlefield and allowed somebody else to play the role of hero on the evening of January 14 1761 at Panipat did well for themselves and their future generations.

As I read Maratha history as a schoolboy,  I often thought the one party Maratha's thrashed almost every single time- like Obelix treating Romans in Asterix comics- was Nizam.

"When you think of India's all-time richest people, what are the names that cross your mind?
No, it's not the Tatas, Birlas or Ambanis, it's Osman Ali Khan, the last Nizam (or ruler) of Hyderabad. According to a new inflation-adjusted list of the world's richest people of all time, the Nizam, who ruled Hyderabad between 1886-1967, was ranked sixth with $ 236 billion."

"The first three Tests were drawn, but England won the fourth, at Kanpur....After that win, the team paid a visit to the Nizam of Hyderabad, then the richest man in the world. Ridgway has a picture of the team with the Nizam, sitting on a sofa alongside Carr and the two Howards, with the professionals arrayed behind them. "He had so many wives we called him His Exhausted Highness," Howard wrote. "Everything I said to him, he replied, 'I see.' It became a great saying at home. 'I see, said the Nizam.'"" 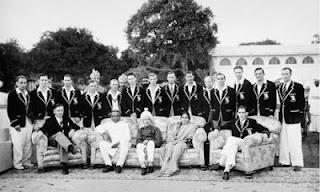 the Nizam of Hyderabad, " His Exhausted Highness" but worth $ 236 billion

After reading this, I am recycling my earlier post dated Feb 19 2008.

Historian WILLIAM DALRYMPLE has written at length about the Nizam’s legacy. (The Guardian and Outlook February 18, 2008).

Here was the regime about which I have rarely read anything good.

Historian Setu Madhavrao Pagdi’s (सेतु माधवराव पगडी) first hand account of the last days of the Nizam regime from his autobiography-Jeevansetu (जीवनसेतु) 1969- describes how rotten it was.

I have also attended speeches delivered by the late Narhar Kurundkar (नरहर कुरुंदकर)- a staunch Gandhian and one of the most liberal thinkers Maharashtra produced- at 'Vasant Vyakhyan Mala' (वसंत व्याख्यान माला),  Miraj (मिरज) wherein  he described how bad and cruel Nizam regime in 20th century was.

On March 11, 1795, Marathas vanquished Nizam in the battle of Kharda. For a change all Maratha chieftains fought together.

Nizam’s army had played havoc before the battle. Among other things, they had slaughtered cows in the temple complex at Ambejogai (आंबेजोगाई).

Shejwalkar rued how Marathas wasted the opportunity to eliminate Nizam. He argued how this blunder of Marathas costed Indian union dearly in 1947.

Even today, Nizam and his legacy continue to grab attention and resources.

His Chowmahalla palace complex is being restored to its former glory while Maratha’s Shaniwar Wada (शनिवार वाडा) continues to languish, remains ghostly. 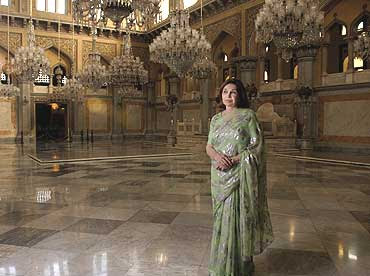 Princess Esra at the Chowmahalla palace complex (pic courtesy: Outlook Magazine)
Posted by Aniruddha G. Kulkarni at 9:00 AM No comments: