Not to do with sex but snoring!

In Marathi world, snoring is not made as much fun of as it deserves. It is perhaps because far more men are victims of it than women.

I have been snoring, I think pretty horribly, for many years now. Luckily for our marriage and our budget (as explained later), my wife sleeps like a log and only the noise of my nose blowing, next only to a bad dream, can wake her up.

“Not since the Victorian age of starched sheets and starchy manners, builders and architects say, have there been so many orders for separate bedrooms. Or separate sleeping nooks. Or his-and-her wings.
In interviews, couples and sociologists say that often it has nothing to do with sex. More likely, it has to do with snoring. Or with children crying. Or with getting up and heading for the gym at 5:30 in the morning. Or with sending e-mail messages until well after midnight.”

Lady in the picture is surely on her way to order her own bedroom. 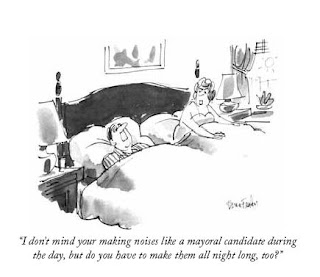 In picture below, Mrs. Booth did not cure anything. Booths moved into a larger house with separate bedrooms! 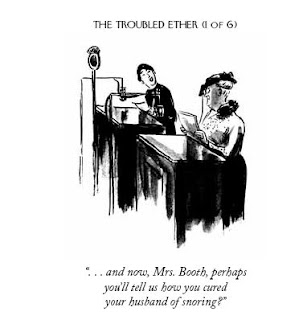 Dark Side of the Moon

In Marathi, I hear cartoons are increasingly being referred as हास्यचित्रे “Hasyachitre”. But cartoons are not necessarily about a laugh (हास्य) or a smile or even a chuckle.

Following cartoon made me cry. Tragedy of aging. 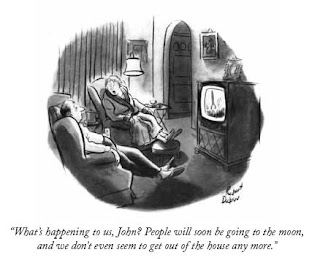 By the way moon travel itself has come under a lot of flack of late.

I remember post 1969, moon travel was every where. ‘Forts’ children make in Maharashtra during Diwali used to have themes of Apollo mission. Ganesh festival pandals exhibited moon landing ‘scenes’. Neil Armstrong for few years was as popular as Rajesh Khanna. Experts predicted that faith in astrology would come down because moon- who plays such an important part in one’s horoscope- was soiled by a mortal man.

Resurgent Hindu and Muslim fundamentalisms were few years away. Hence, no one talked about Buzz Aldrin performing the ritual of Holy Communion on the surface of the moon.

Gerard DeGroot author of “Dark Side of the Moon: The Magnificent Madness of the American Lunar Quest” calls moon missions “ A $35bn ego trip - an outrageous waste of money that should have been spent addressing problems on Earth. For him, Neil Armstrong’s “small step” on to the moon achieved nothing for mankind beyond a brief burst of media-generated euphoria. Its main purpose, to beat the Russians in the race to the moon, had been achieved. The astronauts were paid off and space travel gave way to other fads.”

“DeGroot, a fine writer with a real flair for storytelling, has fun with Nasa’s extravagance and its tendency to look for complex solutions where simple ones would do. For example, the agency developed a pen that would write in zero gravity - an invention that is still marketed to gadget enthusiasts. The Russians made do with pencils. And he demolishes the commonly accepted idea that Teflon and Velcro were spin-offs of the space race."

Posted by Aniruddha G. Kulkarni at 11:45 AM No comments: