“…In the final days of the San Francisco Conference, the delegates negotiating the U.N. Charter received a visit from President Harry Truman. He acknowledged the enormous challenges they faced, and said success was only possible because of what he called an “unshakable unity of determination.” Today the world is engaged in another period of great challenge. And by continuing to work together, that unshakable unity of determination will be ours. Together, we confront and defeat the evil of terrorism. Together, we can secure the Almighty’s gift of liberty and justice to millions who have not known it. And together, we can build a world that is freer, safer, and better for the generations who follow…”

This blog had a take on that historic ride with the help of B S Mardhekar बा. सी. मर्ढेकर. Read it here: Our Globe- Not Guaranteed Against American Sacred Cows and their Pee.

After I wrote that post, I came across W H Auden’s 1938 sonnet about League of Nations that ends:

“Far off, no matter what good they intended,
The armies waited for a verbal error
With all the instruments for causing pain,
And on the issue of their charm depended
A land laid waste with all its young men slain,
The women weeping and the towns in terror.”

W H Auden was, as he described Freud, not a person but a climate of opinion. No doubt he was the greatest influence on B S Mardhekar बा. सी. मर्ढेकर. 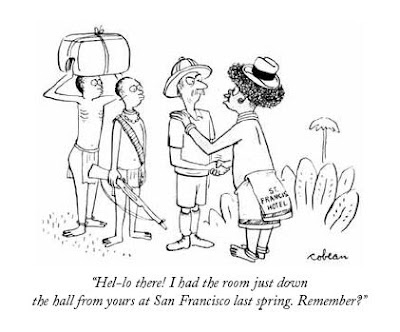 Artist: Sam Cobean The New Yorker 22 September 1945
Posted by Aniruddha G. Kulkarni at 9:00 AM No comments: Links to this post