If Indeed Napoleon Never Set a Foot in 'Waterloo'....

"Napoleon never set a foot in Waterloo—it’s a fact.”

We are observing 100th anniversary of World War I (1914-1918) since last year and the most relevant word that comes to mind while doing so is slaughter.

200 years ago on that Sunday too thousands of men were slaughtered.  Lest we forget, thousands of horses too died.

Most of the Battle of Waterloo took place a few miles south of real Waterloo, in Braine-l’Alleud and Plancenoit. The battle got its name because the victor, Arthur Wellesley, 1st Duke of Wellington, penned his official report from his Waterloo headquarters.

I have also been curious about how and when the news of the battle reached shores of India.

How did, if at all, the Maratha's, themselves a dying (if not already dead) empire, learn about it? After all  Wellesley had earlier won a decisive victory over the Maratha Confederacy at the Battle of Assaye in 1803.

One of the most interesting commentary, I have read, on the battle has come from Andrew Roberts in '
Smithsonian Magazine':


"...If Napoleon had remained emperor of France for the six years remaining in his natural life, European civilization would have benefited inestimably. The reactionary Holy Alliance of Russia, Prussia and Austria would not have been able to crush liberal constitutionalist movements in Spain, Greece, Eastern Europe and elsewhere; pressure to join France in abolishing slavery in Asia, Africa and the Caribbean would have grown; the benefits of meritocracy over feudalism would have had time to become more widely appreciated; Jews would not have been forced back into their ghettos in the Papal States and made to wear the yellow star again; encouragement of the arts and sciences would have been better understood and copied; and the plans to rebuild Paris would have been implemented, making it the most gorgeous city in the world.

Napoleon deserved to lose Waterloo, and Wellington to win it, but the essential point in this bicentenary year is that the epic battle did not need to be fought—and the world would have been better off if it hadn’t been." 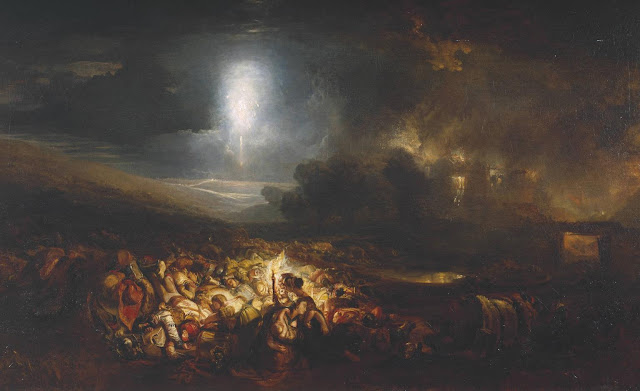 Jenny Uglow writes about it:

"But his great painting, The Field of Waterloo, of 1818, shows a scene of slaughter rather than triumph. Here the exuberance of all the satirical prints and dashing military watercolors is forgotten. Instead the opposing nations mingle and the divisions of rank vanish, as the women hunt by the light of a flaming torch, to find those they love among the tangled bodies."
Posted by Aniruddha G. Kulkarni at 9:00 AM No comments: