Dawn columnist Ayaz Amir said on November 2, 2007:
”… This rescue operation (for Pakistan) has to come from some other source, perhaps the Supreme Court. One clutches at straws that are available and in our reduced circumstances it is only the Supreme Court which is keeping the nation’s hopes alive…”

On November 3, 2007: “Embattled President Pervez Musharraf on Saturday night clamped a state of emergency in Pakistan ahead of a crucial Supreme Court ruling on the legality of his re-election, plunging the country into a fresh political crisis.

An eight-member Supreme Court bench immediately set aside the Emergency order which suspended the current Constitution amid reports that Chief Justice Iftikhar Muhammad Chaudhry, who has been at loggerheads with Musharraf, has been asked to go.”

Courageous Pakistani press and senior judiciary are fighting back.

Lawyers are getting beaten black and blue reminding me of the scene of Dandi Yatra from film Gandhi. (Not surprising because so many lawyers were at the forefront of India’s freedom struggle! American image of blood sucking lawyer doesn’t quite hold in South Asia.)

“…Nonetheless, had the Emergency not been imposed, the fallibility of the press, public servants and the judiciary would not have been proved. Newspapermen, in the words of L.K. Advani, began to crawl when they were asked to bend. The anxiety to survive at any cost became the key concern of public servants. Most of the judiciary was so afraid that it would reject habeas corpus petitions against detention without trial. The high priests at the SC, with the exception of Justice H.R. Khanna, upheld the Emergency and the suspension of fundamental rights.

The imposition of the Emergency exposed the timidity of Indian society once again. Its moral hypocrisy was reinforced. There was no awareness of what was wrong, nor was there a desire to act according to what was right. The dividing line between right and wrong, moral and immoral, ceased to exist. And the nation is still paying for it….”

My thoughts and prayers are with Pakistani people.

(Give me courage Give me humility
To witness all that I see,
Let my intellect bend
like red hot steel; )

Like in the picture below, President Musharraf wishfully thinks Pakistan needs a kind of supreme supreme court! No, it just needs the existing Supreme court and Chief Justice Chaudhry. 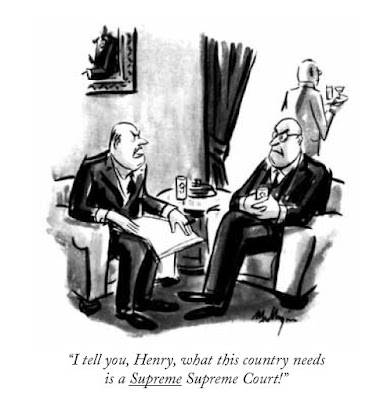 Artist: James Mulligan The New Yorker 6 July 1957
Posted by Aniruddha G. Kulkarni at 12:09 PM No comments: Links to this post