Sadhana: Now that’s a woman. But did God Create Her with Special Care?

"Strange gods reveal themselves in beautiful shapes, appear eternal and untouchable for the brief terms of their on-sale dates, and then vanish as swiftly as they came, generating constantly new and immediate responses to the slightest flutter of need in the public consciousness."

"Time is a trickster, it plays pranks on you. All it needs to do is to thicken your skin, bloat your body into a puffball, and your sense of self disappears under a backstage of cosmetics.

Even Bollywood with all its magic often fails to defeat time. Icons of yesterday often fail even in terms of nostalgia. Who remembers Ranjan or Padmini or Ragini in the new generation, or even Nadira? Dev Anand appears a sad imitation of himself. Sadhana disappears seeking the aura of a Garbo-like recluse and all she receives is indifference..." 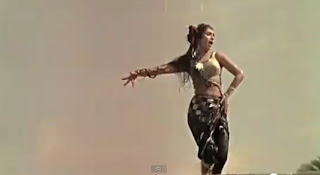 As a kid, watching Sadhana in 'Geeta Mera Naam', 1974, after watching her in 'Rajkumar', was learning little more about heartless, witless nature. What could happen to you in just 10 years...

"...Aware that I wasn’t getting my “serious, analytical” interview, I rounded off with film-related questions. He (Raj Khosla) answered them, too, getting particularly sentimental about Sadhana. “Now that’s a woman. God must have created her with special care,” he sighed. The woman smiled, “Raj-ji… he’s mad about his heroines, falls in love with all of them.” Not surprisingly, his women characters were infallibly steel strong. He wept a bit, then, recalling the memory of his mother..." 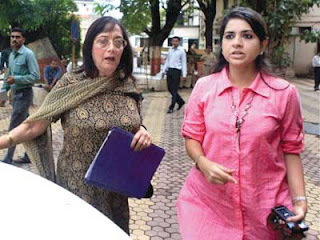 "Mystery surrounds the 'death' of yesteryear actress Nalini Jaywant who, neighbours say, passed away three days ago in tragically lonely circumstances at her bungalow in Chembur. Her relatives and those she had once worked with in the film industry were all unaware of the passing of the star who scaled the heights of fame in the 1940s and '50s but had turned into a complete recluse for the last many years.

Jaywant's neighbour Ajay Kapoor told TOI that the security and domestic staff in the colony saw the body being taken away in an ambulance on Tuesday. "However, by the time we got to know about it, it was all over," he says. "We heard from our staff that a man, who claimed to be a distant relative , came and took the body away. The house is locked and in complete darkness for the past three days, the servants have gone, and Naliniji's pet dogs are on the streets. We neighbours have been taking care of them."..."
Posted by Aniruddha G. Kulkarni at 9:00 AM No comments: Links to this post