Taslima Nasreen and Sanskrit Playwright Bhasa, What is Common to them?

Outlook December 10, 2007 said: Taslima Nasreen is on the run again. Earlier she was attacked in Hyderabad in August 2007 at a book launch. In November 2007, riots in her name erupted in Kolkata.

Her detractors want her work burnt down. Here she is in good company of great Sanskrit playwright Bhasa (circa 4th/5th century BC).

A G Noorani said in Economic & Political Weekly December 1, 2007 : "Book banning is a civilised form of the vice of book-burning which is a sure symptom of fascism. India has a formidable record of book banning. As with much else, independent India simply took over the habits of the British raj."

Does India have a formidable record of book burning too?

According to the late Durga Bhagwat दुर्गा भागवत, Indians burnt down Bhasa’a भास play “Pratima प्रतिमा” because they didn’t like it.

Durga Bhagwat liked Bhasa’s plays more than any one else’s.

She said: “Kalidasa is sweet to ears but there is no ‘stuff’ in him. No ‘stuff’ no drama…”

Bhasa wrote ‘Pratima’ based on the life of Rama.

She further said: “…But people didn’t like it (Pratima) and they burnt it down. After passage of hundreds of years some one discovered ‘Pratima’ and hence we have it…

…Such was the unprecedented talent of Bhasa. I like Bhasa very much. There is not an iota of artificiality in him.”

According to Godse, Rama in Bhasa’s play has the main objective of expanding Arya’s empire beyond river Godavari by conquering Anaryas (non-Aryans). (No wonder M Karunanidhi isn’t happy.)

Like the Old Testament, both Ramayana and Mahabharata (episode of burning of Khandav Forests) tell us chillingly how Aryans went about acquisition of new land, dispossessing it of its earlier inhabitants.

The Economist December 15, 2007 said:"...Over the centuries, pioneer peoples, from the Ulster Protestants to the Boers, have drawn inspiration from passages in the Old Testament which describe the acquisition of new land, and the dispossession of its earlier inhabitants.

What makes America's Christian Zionists unusual is that their fascination with conquest is vicarious: it is projected onto a land thousands of miles away. The movement's followers are unlikely to feel at first hand the consequences of the policies they advocate. This makes their aspirations both more aggressive and more fantastical."

One interesting observation of Godse is as follows: Jatayu is a traitor Anarya. While killing a fellow Anarya- Jatayu, Ravana says: I will send you to dwelling of Yama (यमसदन). But dwelling of Yama is an Aryan concept. Therefore, Ravana’s usage of this alien phraseology is very meaningful.

“…Mr. Bhattacharjee was referring to the controversy generated by reports in a section of the media that said that the Chief Minister, while delivering a public speech on the 15th anniversary of the demolition of the Babri Masjid on Thursday, had said that Lord Ram existed only in the poet’s imagination.

“While addressing a public meeting organised by the government of West Bengal, Sports and Youth Service department, in connection with the 15th anniversary of the demolition of the Babri Masjid, I quoted the following lines from Rabindranath Tagore: ‘Kobi tobo monobhumi Ram er jonmosthan Ayodhya r theke satya jeno’ [the poet’s mind is the birth place of Ram, which is more real than Ayodhya],” the statement said.”

Tagore is dead for a while now. Else, he would be on the run! How can anything be more real than Ayodhya?

Like in the picture below, Ram indeed has become a dreaded word for many people. 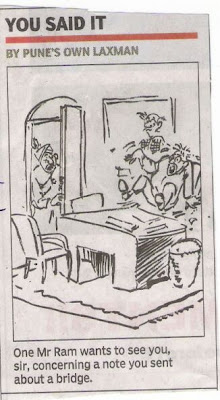