We, The Philistines. Can't Even Preserve It.

The outer portion of second century BC and Unesco World Heritage Site Ajanta caves has been badly scarred after the Archaeological Survey of India (ASI) dug a pit and hastily abandoned the construction of a cement portico, which was meant to be pleasing to the eyes…”

This didn't surprise me because on February 3, 2004 NYT had reported:

“…Only in 1986 did a group of Indian archaeologists resume work at Angkor Wat, but their techniques -- chemicals to clean the temple towers and cement to support interior walls -- were widely criticized.

Mr. Borath defends the Indians. ''Their presence was politically important,'' he said. ''They were the first to return, with few resources and under very difficult conditions. There was a cease-fire, but still great insecurity. Perhaps their method was not correct, but it is good to remember the conditions.'' "

I felt deeply sad at this development because just this fortnight, Frontline (December 7, 2007) has showcased Ajnata Caves: Simply Grand as the eighth part of their ongoing 25-pat series on Indian art.

“Around the 2nd century B.C. at Ajanta, great shrines and monasteries were carved out of the mountain…

…in the gorge of the Waghora river, Ajanta’s paintings occupy the pre-eminent position in the mural traditions of Asia. However, its sculpture, among the finest ever created in India, is often not given the attention it deserves…

…Colossal Buddha, Kanheri, 5th and 6th century. This figure, more than 22 feet (6.7 metres) in height, marks the beginning of a long tradition of colossal Buddhas, which became a popular representation across the Tibetan plateau and Central Asia…”

But we 21st century Hindu Indians are as much philistines as any. What do we care for preserving our history and composite culture? Many of us just want to use our history and mythology to attack minorities.

One has to be reminded that Pune is a historical city. There is hardly any evidence of it other than ghostly Shaniwar Wada, poorly maintained Sinhgad fort and a couple of other places. It's hard to believe that once rulers of Pune ruled India, from Sindhu to Kaveri.

A couple of examples:

Ibrahim Gardi and his division (consisting largely of South Indian low caste Hindus called Telange) showed the greatest valour at the third battle of Panipat (January 14, 1761). But there is no monument to remember that supreme sacrifice and show case India’s composite culture.

Alandi, near Pune, where Saint Dnyaneshwar ज्ञानेश्वर (1275-1296) took samadhi (a yogic path to salvation by giving up life) is a centre of spirituality for whole of Maharashtra and beyond.

Scholar and critic M V Dhond has commented on Alandi's degradation in following words:"...second regret,degradation of Alandi...I feel terrible pain remembering bad condition of my Jñanadeva's place of samadhi...will this place ever get back its original serene and gratifying looks?..." (February 2, 1996) 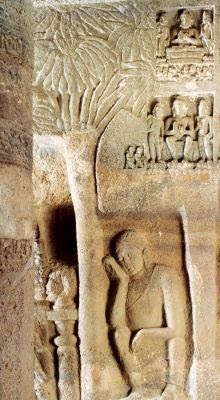 Cave 26. In the Mahaparinirvana scene, the Buddha's disciple Ananda sits at his feet. He is sad and forlorn at the passing away of his master. The simplicity of this representation and the humanity expressed in it are remarkable. The abstract representation of the flowering tree above is delightful 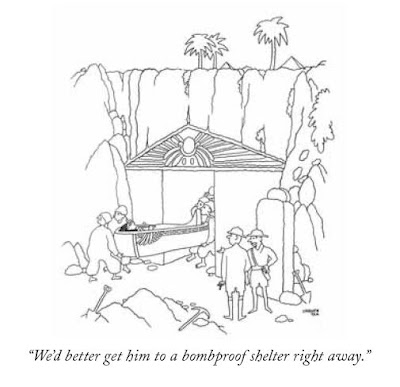 Artist: Rea Gardner The New Yorker 3 August 1940
Posted by Aniruddha G. Kulkarni at 9:00 AM No comments: Links to this post