Indian Poor, Run! They May Pinch Your Kidney

Some things never go away. Subject of Illegal kidney transplants is one such.

The latest scam would scare anyone entering an operation theatre anywhere in India.

“…In a country where one out of every three live in poverty, Kumar (the accused) and his ilk carved out a huge transplant industry…

…The organ shortage in the West has spawned a new demand-and-supply equation across the world. Given the potent mixture of the desperation of rich patients in the West, the failure of the law in India, the willing collusion of medical professionals, the availability of helpless individuals from deprived sections of society and the incompetence of monitoring agencies, there are doubts about whether Ramadoss’ (federal minister) new initiatives will work. But it’s better than doing nothing and allowing the likes of Kumar to flourish.” 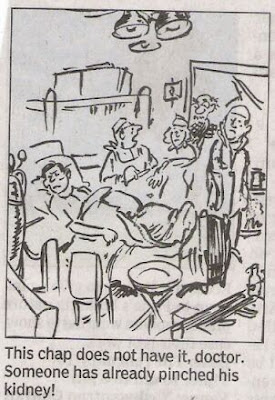 Artist: R K Laxman Times of India 9 February 2008
Posted by Aniruddha G. Kulkarni at 9:00 AM No comments: Links to this post