32 Years After The Emergency, Durga Bhagwat and Henry David Thoreau

Thirty-two years ago, midnight today, the Emergency was declared in India.

I remember the next day vaguely. For shouting slogans against the government at Kisan Chowk, Miraj, cops arrested one of our neighbours young Makrand Deshpande (मकरंद देशपांडे). I witnessed it. There was nervousness in the air, which was going to last for a while.

“….The press was gagged, dissent smothered and individual freedom suspended. Nearly 100,000 people were detained without trial. So immense was the fear, that judges tailored their judgment to suit government convenience and magistrates issued blank warrants for arrest. Public servants as well as the police willingly carried out arbitrary and high-handed actions. It was a reign of terror. This authoritarian rule lasted 22 months….. Institutions got such a thrashing that it has not been possible to restore them to their original form even after three decades. Politicians of all parties and their cohorts, the bureaucrats, have found the battered institutions convenient and cooperative. Their whims and wishes get authenticity, and gone are the days when they themselves were looking for norms……. The system has not recovered since. The civil service is now a set of sycophants and supplicants who allow themselves to be used by the politicians……. Media’s role is important. But some of the media is irresponsible and some just timid. I wonder if we will pick up the gauntlet thrown to us by the government in the shape of the Broadcast Bill. The media can retrieve its reputation because it failed during the Emergency. L.K. Advani, when information minister, aptly remarked, "You were asked to bend but you crawled."”

If Ms. Indira Gandhi was the architect of the Emergency, one of its fiercest and the most fearless opponent was another lady- Ms. Durga Bhagwat दुर्गा भागवत. In the presence of powerful union cabinet minister Y B Chavan,she launched a frontal attack on the government from the dais of 51st Marathi Sahitya Sammelan at Karad in December 1975. Later Ms. Bhagwat inspired opposition to Emergency across Maharashtra.

Durga-bai had a lot of affection for Henry David Thoreau because of his nature’s love and that he was an inspiration to Tolstoy and Mahatma Gandhi. The affection was so deep that she absolved India Gandhi of all her crimes when she discovered that Ms. Gandhi had written a poem on Thoreau!

Durga-bai quoted following paragraph from Thoreau’s writing in her speech to Mumbai Marathi Granth-Sangrahalay in December 1975:

“However mean your life is, meet it and live; do not shun it and call it hard names. It is not so bad as you are. It looks poorest when you are richest. the fault-finder will find faults even in paradise. Love your life, poor as it is. You may perchance have some pleasant, thrilling, glorious hours, even in a poorhouse. The setting sun is reflected from the windows of the almshouse as brightly as from the rich man's house. The snow melts before its door as early in the spring. I do not see but a quiet mind may live as contentedly there, and have as cheering thoughts as anywhere, and, indeed, the town's poor seem to live the most independent lives of any. They are simply great enough to receive without misgiving. Cultivate poverty like sage, like a garden herb. Do not trouble yourself to get new things, whether clothes or friends. That is dissipation. Turn the old; return to them. Things do not change; we change. If I were confined to a corner in a garret all my days, like a spider, the world would be just as large to me while I had my thoughts.”

During her life Durga Bhagwat knew the path Thoreau took. She didn’t need to ask like Helen E. Hokinson’s characters below. 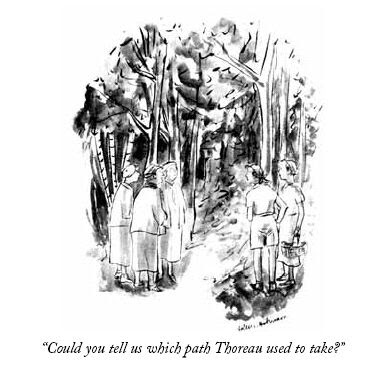