Talking to Lokmat लोकमत October 21, 2007, artist Ravi Paranjape रवी परांजपे said:
“…We are culturally poor. But no one talks about it. We don’t have picture-literacy. The British misguided us that we could become cultured without picture-culture. Our education system was based on that belief….”

If we consider the times during and after the British Raj, this assessment, with the exception of Tagore’s Shantiniketan, may be fair.

However, we had very robust “picture-culture” before the Raj. The late D G Godse द ग गोडसे has convinced me about it long ago. If you need any proof and can’t access D G Godse, just follow 25-part series on Indian Art being published by Frontline.

Indic art, which is on display all over India, does not strive to convey photographic reality. Instead, it depicts the grace that is inherent in all creation.

I have been reading Orhan Pamuk’s books and the thing that strikes me most is the importance of miniatures, the highly stylized paintings, in Turkish life.

ORHAN PAMUK too talks about grace:

“My miniaturists saw the world through the God's eye, so that's a very communitarian world where the rules are set and there is an endlessness of time.”

Orhan Pamuk compares and contrasts Western and Eastern art forms like painting and miniature. He claims that the Western portraiture is a more popular art form since the artist imitates reality as it is, as if immortalizing the one painted. However, the Eastern miniatures are more original in content since they turn out to be the expression of the miniaturist's synthesis of the external reality through his own prism.

One of Pamuk’s character says: “Believe me, none of the Venetian masters have your poetic sensibility, your conviction, your sensibility, the purity and brightness of your colors, yet their paintings are more compelling because they more closely resemble life itself... Indeed, [the Venetian masters] paint what they see, whereas we paint what we look at. Beholding their work, one comes to realize that the only way to have one's face immortalized is through the Frankish style... Just a glance at those paintings and you too would want to see yourself this way, you'd want to believe that you're different from all others, a unique, special and particular being.”

Most popular Marathi writers of 20th century have not much demonstrated their “picture-literacy”. Versatile artist P L Deshpande पु ल देशपांडे is almost mute when it comes to paintings and cartoons. If he were to, Punch and The New Yorker would have figured in his writings. He would have paid more than just lip service to the art of great cartoonist like Vasant Sarwate वसंत सरवटे.

Pictures and we go back long way. Even in caves, our vanity was expressed through them. Worse, our wives caught us RED-handed! 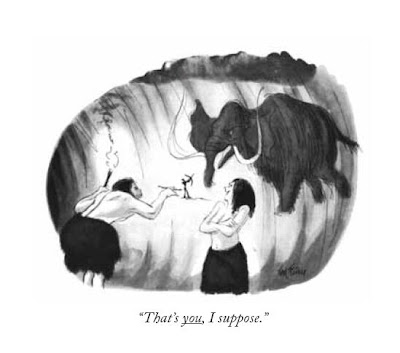 Artist: Ed Fisher The New Yorker 11 Feb 1956
Posted by Aniruddha G. Kulkarni at 12:23 PM No comments: Links to this post