All I know I already live in Hong Kong

I just finished reading John Lanchester's "Whoops!: Why everyone owes everyone and no one can pay".

I found some parts of it very good.

You can read it on Google books here.


"...I grew up in Hong Kong at the time when it was the most unbridled freemarket economy in the world. There were no rules, no taxes (well, eventually there was a top-rate tax of 15%), no welfare state, no guarantee of healthcare or schooling. The ugly edge of no-rules capitalism was everywhere apparent. Shantytowns sprawled halfway up the hillsides. But the ways in which capitalism created growth and wealth were everywhere apparent too.

Refugees from communist China swam, crawled and smuggled themselves into Hong Kong in every imaginable way, and they regularly died in the attempt. What they were trying to get to wasn’t the place so much as the system. So the system must be something of extraordinary power. Even a child could see that. You could see it mainly in the sheer speed of change. It was a regular event to go round a corner and experience the jolt of not knowing where the hell you were, because some regular landmark had disappeared.

At that time, Hong Kong was like an experiment, a lab test in free-market capitalism. Britain seemed much slower, more cautious, more regulated, warier of change. But in the three decades after I left Hong Kong, it was as if there were a kind of reverse takeover, in which Hong Kong’s rules took over the rest of the world. The unbridled and unregulated operation of the free market became the new normal.

It wasn’t so much that this version of capitalism won the argument as that it won by sheer force: countries that had adopted it were growing their economies faster than those that weren't. You can't accurately measure subjective changes in the texture of people's experiences, but you can measure growth in GDP, and the evidence from GDP was irrefutable. With Ronald Regan in power in the US and Mrs Thatcher in power in the UK, a Hong Kongite version of free-market capitalism took over the world. I couldn't go home again, but in some important respects it made no difference because home was coming to me..."

It's interesting some people want a "work permit" system for Mumbai, a kind of 'visa' for Indians.

Apart from being certain about rampant corruption- Octroi like- indulged by the natives, one can imagine what might happen to migrant workers in such a setup:

"They, huddled masses and wretched refuses from the picture below, will swim, crawl and smuggle themselves into Mumbai in every imaginable way, and they will regularly die in the attempt."

Maybe it will be the last chapter in Hong Kongisation of this country. 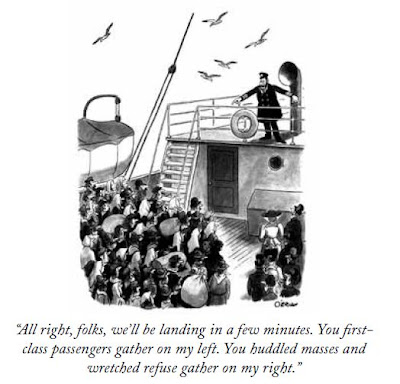