Orwell's Depressing Book: A Saga of Jungle Hate and Lust!


“...He put his hand on her breast. Privately, Ma Hla May did not like this, for it reminded her that her breasts existed–the ideal of a Burmese woman being to have no breasts. She lay and let him do as he wished with her, quite passive yet pleased and faintly smiling, like a cat which allows one to stroke it. Flory’s embraces meant nothing to her (Ba Pe, Ko S’la’s younger brother, was secretly her lover), yet she was bitterly hurt when he neglected them. Sometimes she had even put love-philtres in his food. It was the idle concubine’s life that she loved, and the visits to her village dressed in all her finery, when she could boast of her position as a ‘bo-kadaw’–a white man’s wife; for she had persuaded everyone, herself included, that she was Flory’s legal wife.


When Flory had done with her he turned away, jaded and ashamed, and lay silent with his left hand covering his birthmark. He always remembered the birthmark when he had done something to be ashamed of. He buried his face disgustedly in the pillow, which was damp and smelt of coco-nut oil. It was horribly hot, and the doves outside were still droning. Ma Hla May, naked, reclined beside Flory, fanning him gently with a wicker fan she had taken from the table....”

The passage above, one of the 'juiciest' from the book, is from  George Orwell's 'Burmese Days', 1934 that I have read from cover to cover, primarily because of his essay 'Shooting an Elephant', 1936.

The book is slightly depressing and also little boring.

Therefore, I was quite pleasantly surprised to find the following cover of one of its editions. If I had read this version, some electricity- emanating from the cover- would have flowed though my body! 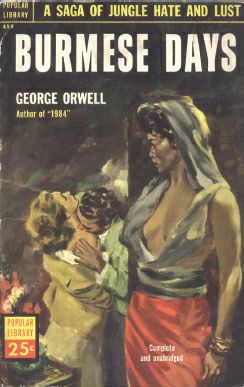 Apparently it's an attempt to "connect it to Helga Moray’s 1934 novel Tisa, which declares “She Was his Captive but He Was her Slave” on its 1953 Popular Giant reprint." ('American pulp : how paperbacks brought modernism to Main Street' , 2014 by Paula Rabinowitz). 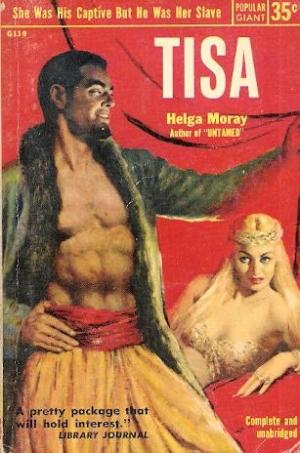 This all is so hilarious!
Posted by Aniruddha G. Kulkarni at 9:00 AM No comments: Links to this post