Anju, Relax. Oceans May Be Rising But Don’t Start Packing Yet!

”… The 20th century sea level rise was about 17 centimeters. Our predictions for the end of this century are 18 to 59 centimeters. So even if we end up somewhere in the middle, we have a pretty serious crisis on our hands….

If you want to stabilize the concentration of greenhouse gases at the level that will limit temperature increases to 2 degrees to 2.4 degrees centigrade, the cost to the global economy in 2030 will be less than 3 percent….”

”… the IPCC’s estimates show that oceans will rise between 18-59cm, and that the most likely scenario is around 30cm. That’s similar to what the planet experienced in the last 150 years and it (rather obviously) coped….

Rising temperatures will mean more heat waves, but the cold is a much bigger killer than the heat. By 2050, global warming will cause almost 400,000 more heat-related deaths each year. Yet at the same time, 1.8m fewer people will die from cold. In this respect, global warming will save lives...

If we eradicated malaria, we would not only do immediate good, but leave these nations more productive—estimates suggest they would be twice as rich by 2100—with more resilience and capacity to respond to climate change. Instead of saving one person from malaria through climate change policies, the same amount of money spent on malaria could save 36,000 people. This isn’t just an academic discussion—it's about helping real people now and in the future.”

Personally speaking cold bothers me a lot more than heat.

Last word in this debate is not spoken yet. Therefore, Anju relax,let us not start packing yet! 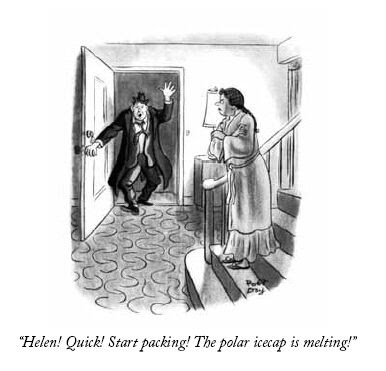 Artist: Robert J. Day The New Yorker 4 April 1959
Posted by Aniruddha G. Kulkarni at 11:19 AM No comments: Links to this post