Vodka: Nobody in the World Knows What it is Made out of


“…Yet even as drinkers of the world raise a toast to vodka, we should all be reminded of its dark past: the generations of Russians who found not only consolation at the bottom of the bottle but also grief, illness, and death. We must remember that such incredible human costs were—and still are—attributable not just to the lowly drunkard, but to the autocratic political system that reaped unimaginable profits from the people’s misery, generation after generation.


With history in mind, the cowboy philosopher’s alcoholic musings sound even more fitting: “Now that is the whole story to Vodka,” Rogers surmised. “Nobody in the world knows what it is made out of, and the reason I tell you this is that the story of Vodka is the story of Russia. Nobody knows what Russia is made out of, or what it is liable to cause its inhabitants to do next.”


The story of vodka truly is the story of Russia: not just its culture and society, but its history and statecraft as well. Whether it can ever break free of the shackles of vodka politics—and the autocratic system that nurtures it and is nurtured by it—may well be the most fundamental political question facing the future of Russia.”

“A man comes from the dust and in the dust he will end—and in the meantime, it is good to drink a sip of vodka.”


The Economist, December 20 2001:
"...It may be small—each molecule is less than a billionth of a metre long, and consists of a handful of atoms of carbon, hydrogen and oxygen—but ethyl alcohol makes an excellent time machine. People have enjoyed alcoholic drinks since prehistoric times, making drinking one of the few strands that runs throughout the history of western civilisation. Appreciating the art, music or literature of long-vanished cultures can require years of study; recreating their drinks, and comparing them to what we enjoy today, is simple in comparison, not to mention more fun. The consumption of alcohol is so widespread in history, says Patrick McGovern, an archaeological chemist at the University of Pennsylvania, that drinking is, in effect, “a universal language”.."


When I drank little more than occasionally, I liked vodka, beer and rum. I hated (and still do) whiskey's taste including even Scotch's.

These days I hardly drink and don't miss it but I enjoy many aspects of drinking. For instance: What do people drink, how much and how they change in the process?

The chart in The Economist dated June 17 2013 is very informative.

China's national liquor baijiu accounts for a whopping 99.5% of all spirits consumed there. So China does not even feature in rankings of the best-known internationally consumed spirits in The Economist charts. Indi

Among branded liquor, Vodka is the most popular in the world, 4.44 litres, billion.

"...The European Union would define vodka simply as diluted ethyl alcohol, which is, of course, what it is. ...vodka is a Russian word, a diminutive of “water” (before you adopt an ironic smile, be aware that “whiskey” comes from the Gaelic for “water of life”)...My beef is with the whole brouhaha over a liquor whose greatest, and only, virtue is that it is colorless and tasteless...the proliferation of premium vodkas, in ever fancier bottles and at ever higher prices, is understandable, given the decadence of the Western world. The endless debates about which vodka “tastes” better are less so..." 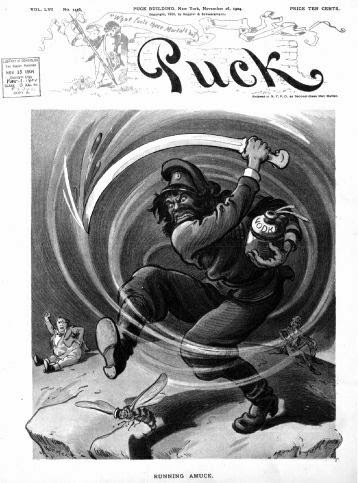 cover of the satirical magazine Puck depicting Russia—clutching a jug of vodka—stumbling into war against a Japanese hornet.

Library of Congress Prints and Photographs Division
and
‘Vodka Politics: Alcohol, Autocracy, and the Secret History of the Russian State’, 2014 by Mark Lawrence Schrad
Posted by Aniruddha G. Kulkarni at 9:00 AM No comments: Links to this post