Corporates beware! Consumers are fighting back

My irritation with our service providers is increasing by the day.

Mind you issues involved are not minor irritants.

It has become so bad that I have come around to think that perhaps government in India is less irritating than the private sector.

But companies perhaps think I am their best customer because I continue to do business with them!

ELEANOR RANDOLPH writes in NYT March 11, 2007 "A Time and Place for Grousing":

"In today’s global economy, however, there is a totally different culture for complaints. Artful bellyaching has become a survival skill. And, the harder it becomes to complain (“You’re talking to me from Tajikistan?”) and the longer it takes to get satisfaction, the angrier customers become in return. American consumers are so angry that companies are assessing the new level of customer rage. A study by Arizona State University found that 70 per cent of customers who had problems were either extremely or very teed-off as a result of their complaints. Scott Broetzmann, president of Customer Care Measurement and Consulting, which helped with the university analysis, said, “You have to go back more than 40 years (i.e., Ralph Nader’s heyday) to find the acrimony you now have between consumers and businesses.” Although there are many companies that care deeply about customer service, too many consider the consumer complaints desk to be a cost center worthy of cutting. So, consumers are fighting back. Mr. Broetzmann, who helps businesses deal with consumer outrage, says that customers become angrier with every hour spent trying to get relief. (Four hours is the average.) But he also says that many consumers say they would be satisfied with respect or an apology rather than, for example, a replacement iPod." 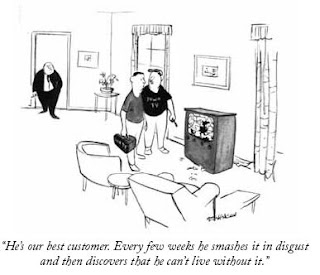 Local stock market pundits often talk about this. Indian growth story is based on local consumption and not based as much on export as say China.

I was brought up in an era of shortages. Shortages of all kinds. Cement, Kerosene, Rice, Sugar, Tires, what-have-you. We were taught frugality. Conspicuous consumption was crime. Leaving food on plate was crime. Eating in restaurant was crime. Too many clothes. And so on........

Now, there is a new spin on all this.

Therefore, every time anything is robbed in front of us, our only hope is: Not that criminals will be brought to the justice but loot will be spent locally! 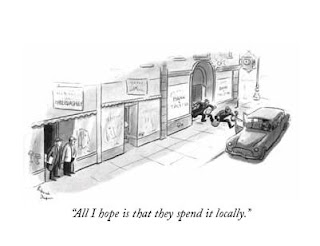 Posted by Aniruddha G. Kulkarni at 4:48 PM No comments:

There is this famous Americanism: If you can’t beat them, join them.

We practise it many times. Once we become insiders, we change our colours.

But you may be exasperated if you can do neither. 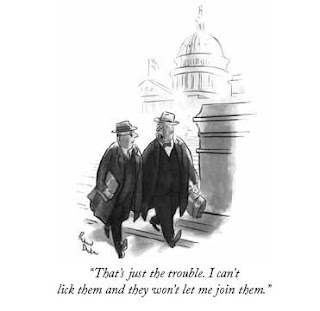 Posted by Aniruddha G. Kulkarni at 4:40 PM No comments:

“Everything that can happen to a person, I think, is determined in the first sixteen years of his life”

Therefore, she is right. He got to write about what he knows best. His first sixteen years- crummy childhood! 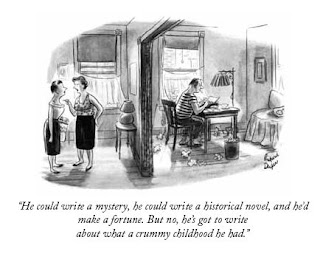 Posted by Aniruddha G. Kulkarni at 4:35 PM No comments:

"Happiness eludes the rendezvous we fix, arrives when we least expect it, disappears when we think we have it in hand. In other words, those people who are unhappy about not being happy forget that happiness has a knack for indirection, coming in the middle of the most ordinary day or disappearing at the height of one’s career. It is a matter of luck, almost of grace, a visitor who enters the house unexpectedly and vanishes on tiptoe." ("Another Last Chance to Change Your Life" By PASCAL BRUCKNER, NYT Jan 1 2007)

Poet Jacques Prévert says: "I recognize happiness by the sound it makes when it leaves".

My wife's aunt, a wealthy doctor in US, says what she misses most in US is the draft dry lands of India get on a summer evening. Whenever I have lived outside western Maharashtra- Mumbai, Chennai, Bangalore, Doom Dooma (Assam), Calcutta- I too have missed it dearly. 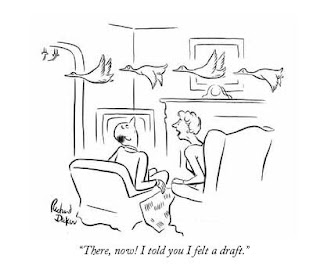 The crowd loves a good loser. Does it?

India may or may not progress any further in the world cup after losing to Sri Lanka.

However, frenzy among Indian cricket followers and media before, during and after India's matches is quite scary. All in the name of the nation. Thank our luck there is no actual war being fought with Pakistan or Bangladesh or Sri Lanka.

I am increasingly thinking that rise of nationalism may be the biggest problem of this century on Indian subcontinent. Ahead of poverty.

I wonder if we can ever solve problems of river water sharing among Indian states in such a charged atmosphere. 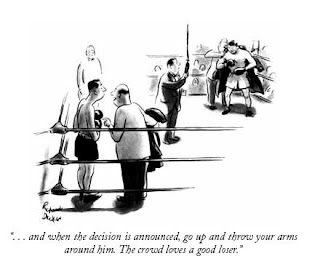 I think media is getting a bigger problem by the day. Electronic media is the worst. Print media is close second.

Much celebrated hero-reporter of "Watergate" scandal Carl Bernstein (played by DUSTIN HOFFMAN in "All the President's Men" ) has this to say (Feb 2006) :

"But I think the really important trends in journalism in the last 25 years are basically the dumbing down of media what I called in a cover piece for The New Republic in 1990 the triumph of idiot culture, manufactured controversy, sensationalism, shouting from the left and the right as if this were real news and real information.In this cacophony truth, the best obtainable version of the truth, which is really what reporting is that snapshot at a given moment of where an event and the facts stand when reporting is good that's getting lost in this noise and, as Bob says, in this rush to get stuff out. Who the hell knows what's right and what's right and what's fact and what's context and what's not? And if you -- it's particularly egregious on television with all due respect and on the Internet." 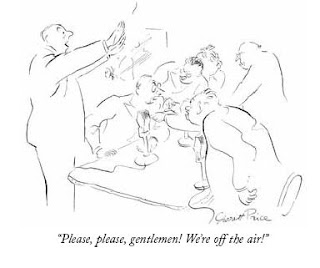 Posted by Aniruddha G. Kulkarni at 11:11 AM No comments: