My first thought was a deep regret: Although I lived in Assam from 1989-1992 intermittently, I never saw a dolphin even once! My ‘affair’ with Brahmaputra is documented here.

I fell in love with river dolphins after reading Amitav Ghosh’s “The Hungry Tide”(2004).

I liked the book mainly because it has so much 'water' and water-borne objects in it.

I was raised in western Maharashtra, land of hills and stream-like rivers. Those rivers sometimes have no water, let alone hungry tides, crocodiles and dolphins!

Sadly, the book has no pictures. As reported in the press, I hope they don't make a shoddy Hindi film based on the book and instead include pictures of Sundarbans in the next edition.

"The Ganga has more life in it than a forest; its biodiversity is rich. We know so little because its aquatic life is largely undocumented. The river dolphin is an indicator of the river’s health as it is at the top of the riverine food chain, like the tiger is in a forest. That’s why locals say: “Sons bachao nadi mein,/ naam kamao sadi mein”. (Save the river dolphin,/ earn name and fame.) “Sons Ganga ki gaia hain/ Ganga meri maia hain”. (The dolphin is the cow of the Ganga/ And Ganga is my mother.) … Only some 2,000 dolphins remain today…”

If intelligent dolphins come to know about what we have done to them, they might say... 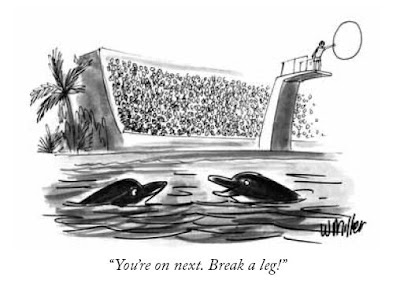 Artist: Warren Miller The New Yorker 30 December 1991
Posted by Aniruddha G. Kulkarni at 7:31 AM No comments: