Another thing that is 64 year old is the baby in following picture: 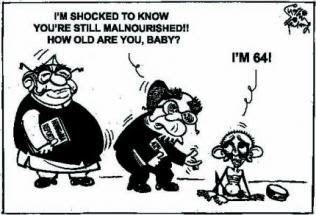 Nourishment and food are always closely associated with Public Distribution System (aka ration) in India.

The dialogue of character of Pran in Hindi film Upkar (उपकार), 1967 became a huge hit. It sounded something like this: "राशन पे भाशन बहुत है लेकिन भाशन पे राशन नहीं." (There are lots of speeches on ration but there is no rationing of speeches.)

We still have grand speeches (bhashan) on the subject.

"The findings of a report on country malnourished children compelled Prime Minister Manmohan Singh to call malnutrition a "national shame" on Tuesday. A report on Hunger and malnutrition (HUNGaMA) released by the PM in New Delhi on Tuesday states: "Over 25% children in the state (UP) are severely and 58.55% are moderately malnourished." The report has covered 40 districts of UP out of total 112 districts across India."

There are more poor people in just eight Indian states than in all the 26 countries of sub-Saharan Africa, with the large state of Madhya Pradesh comparable in intensity of deprivation to war-ravaged Congo. The incidence of underweight children in Gujarat, one of our most economically-advanced states, is substantially worse than the average for sub-Saharan Africa. (from writings of Pankaj Mishra, Pranab Bardhan)

But none of them reached my heart as starkly as Joe Sacco's comic reportage- 'Kushinagar'- for 'The Caravan' January 2012.

Kushinagar is a town in Uttar Pradesh where Gautama Buddha is believed to have attained Parinirvana after his death.

Sample some of the speech bubbles:

Food! The topic to end all topics!

Suvanti: The women go to the fields where the rats are and we collect the grains that [they store] in their holes, and we bring them here. We go there everyday. Who goes? Just the women. All of us. And children. Even men!

Suvanti's husband: I might not have a job for many days but she goes to collect [the rat's food] for at least eight months a year.

What about their son Rajinder?

Rajinder: I try to find food in the holes of rats. 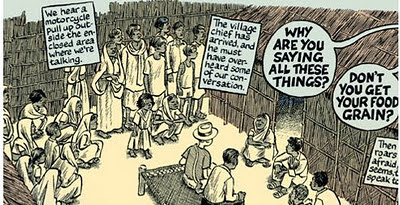 speech bubbles in the picture just above read as follows:

"For the Musahars of the Gurumiha Mafitola hamlet , the Below the Poverty Line definition , which government committees endlessly recalibrate, is a moot point because the issue is not merely poverty which might be bearable, but hunger."

"That is their only concern: food."
Posted by Aniruddha G. Kulkarni at 9:00 AM No comments: