Can We See As Far As Sampati?


"... Indians have learned the hard way about the generosity of vultures, because in the 1990s they started unwittingly to kill off 40 million of them with a veterinarian's painkiller called diclofenac (given to working animals to reduce joint pain so as to make them work longer). Juniper details the chain of unforeseen consequences. Not only did the loss of the birds' sanitary service give rise to a mountain of cattle carcasses, it also triggered a vast increase in the dog population which, in turn, caused 40 million more dog bites and 47,000 additional deaths from rabies. The total bill for losing the nation's spiralling flock of avian scavengers has been calculated at $34 billion..."

There in the middle of the road we saw a big wake (a group of vultures) feasting on an animal carcass. We both were taken aback, a bit scared. We stood and watched the scene for a while and moved on reluctantly.

Later we reached our destination and took in the pristine beauty of river Godavari (गोदावरी) but I couldn't take my mind off the earlier awesome sight for many weeks after that.

It's a great testimony to rootedness of our epics that Ramayana has two distinguished vultures- Jatayu and Sampati but  NO eagle or peacock! Why isn't vulture India's national bird?

It's claimed in Wikipedia that "the spot where a wounded Jatayu was found by Lord Rama is on the outskirts of the Taaked village in Nashik District."

I have no doubt about the claim because I met his descendants as narrated above in Nashik city only! 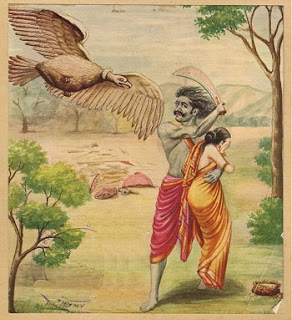 After Jatayu dies, as Rama cremates him ritually, he mourns Jatayu's death in very moving terms:


In Pune urban, I haven't cited a single vulture since 1999.

The word vulture (गिधाडे) creates strong negative vibes in Marathi. They became even stronger for me after Vijay Tendulkar's (विजय तेंडुलकर) popular play 'Gidhade' came out.

If Tendulkar had known what Mr. Cocker has said in the quote at the top, he would have thought twice before naming his controversial play. 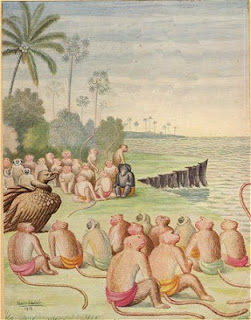 I have always been intrigued by this picture since my childhood.

In the gathering shown,  there are stalwarts like Hanuman, Jambavant, Angada and others but Sampati is shown sitting at the head of the conference table!

Sampati tells the gathering where Sita is. He informs them, sitting there, he can see Sita who is 100 Yojans away from there.

(Staying here I am clearly seeing Ravana and like that Janaki... even for us eagles, our sight and power will be excellent like that of Garuda, the Divine Eagle... [4-58-31]
Thereby, oh, vanara-s, dietetically and congenitally we eagles can always see till the end of hundred yojana-s, comprehensively... [4-58-32]


(Although they are classified in the same family Accipitridae,  vultures are NOT descendants of eagles. That is like giving all the credit for the existence of vultures to the eagles!)

What kind of vision have we humans got? How far can we see?


While writing this post I re-read Arun Kolatkar's (अरुण कोलटकर) long poem 'Dron' (द्रोण), 2002. It describes an imaginary victory feast given by Rama in Lanka after his conquest.

The poem is brilliant and funny. ( I especially like the part where monkeys wonder why human females' breasts- unlike their own females'- are so large!)

( ...To that party
all monkeys had invitation
of course they had,

it was made sure
because lion's share in Rama's victory
was their only...")

I wonder why vultures, bears and squirrels were not invited. Didn't they too contribute to the successful military campaign?

Remember that Rama above- at least in death-  has treated Jatayu like his own relative. Have they already forgotten Jatayu's elder brother Sampati?

Mr. Cocker, Indians forgot the generosity of vultures long time ago. As you say, we are now learning it the hard way.
Posted by Aniruddha G. Kulkarni at 9:00 AM No comments: Links to this post