Thank you Anonymous Sthapathi of Nataraja of Tiruvalangadu

"It's the illusion that all of us scientific types suffer from, that there is nothing more to the Universe than the mindless gyration of atoms and molecules, that there is no deeper reality behind appearances. … It is the logical delusion that after death there is nothing but a timeless void. Shiva is telling us that if you destroy this illusion and seek solace under his raised left foot (which he points to with one of his right hands), you will realize that behind external appearances (Maya), there is a deeper truth." 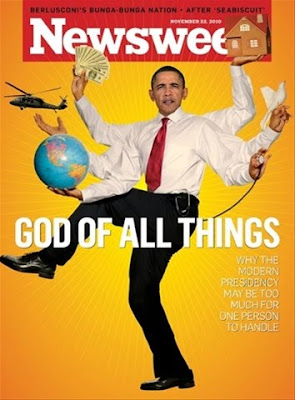 In one the great ironies of this year, when some Hindu organisations were protesting about the cover of Newsweek dated November 22 2010 , Frontline containing masterly essay "Masterpieces in metal" dated November 19 2010 was already on the newsstand. 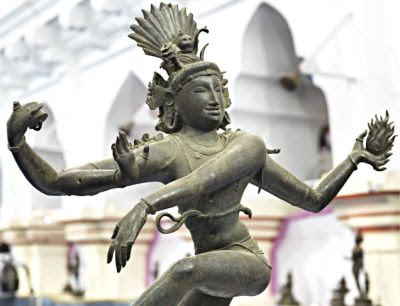 Frontline: "The art historian the late C Sivaramamurti in his seminal work Nataraja in Art, Thought and Literature (first published by the National Museum, New Delhi in 1974) describes this bronze thus:

“To about 1000 A.D. should be assigned the famous Nataraja of Tiruvalangadu now in the Madras Museum [renamed Government Museum, Chennai]. It is a classical example and the best known image of its kind in any public museum in the world. The pose of this figure, its rhythmic movement, the flexion of the body and the limbs, the perfect smile, the physical proportions and the flowing contours are blended into a pose so amazing that it is no wonder that [Auguste] Rodin, the world famous sculptor, considered this to be the most perfect representation of rhythmic movement in the world.”

While Rodin described this metal icon as “perpetual beauty in bronze”, Ananda K. Coomaraswamy noted that “the grandeur” of the conception of Ananda tandava was “a synthesis of science and religion and art”. He called the sthapathis, who made such astonishing bronzes, “rishi-artists”."

How can one pretentious Newsweek cover hurt my religious sentiments? Why can't I just ignore it? Is my faith so fragile? Personally I don't find the cover offensive at all.

Further read description of the bronze from the same issue of Frontline:

"This bronze belongs to the period of Raja Raja Chola (regnal years 985-1014 CE). The hand at the top on his right side plays the damaru and the one below depicts the 'abhaya' (protection) mudra. On the left side, the hand at the top holds a flame of nine tongues, representing the continuum of energy, and the one below is in the 'gaja-hasta' pose (like an elephant's trunk). The pendant on the necklace has moved from its original position, a touch of realism. The 'tiruvasi' (arch) and the flying hair, so characteristic of Nataraja bronzes, are missing. They either broke off or were stolen."

Sure, it's sad but doesn't it enhance its mystique because of incompleteness? [Read D G Godse's (द ग गोडसे) must-read essay to appreciate the beauty of incomplete sculpture of bull sitting in front of one of the Ashtavinayak's.]

And in the larger scheme of things, does it matter?

No. I feel no action by man can damage the concept of Nataraja- nirguna Nataraja- imprinted on my consciousness.

Thank you unknown sthapathi and your team for giving me this confidence.

(p.s Skills that existed in Tamil Nadu more than a millennium ago in the field of metallurgy are intellectually overwhelming.)
Posted by Aniruddha G. Kulkarni at 9:00 AM 2 comments: