"Can't believe we officially have 7 billion people on Earth...yet the top news is Kim Kardashian's marriage"

"Celebrities are not appendages of our society anymore; they are the basis of our communal lives. Literature and architecture, art and politics, are at most sidelights—small, ancient alleyways down which fewer and fewer minds wander. Pop culture has long since left the word culture behind to become the primary way we understand the world."

“When we championed trash culture, we had no idea it would become the only culture.”

He taught higher Marathi at division A on ground floor of Class 12th Science at Willingdon College, Sangli in year 1976-77.

I was in division B on first floor and I don't remember who taught Marathi to us because I bunked most Marathi periods! But I used to hear about his teaching from my friends in division A. Almost no one bunked his class.

Today I miss Pardeshi-sir and so should all those who love Marathi literature because he certainly created love for Mararthi literature among his pupils, many of them just 16-year old studying science and aiming to become engineers and doctors.

As I write this, he reminds me of a long-lost era when a 'mere' teacher of Marathi language was a hero to a large number of middle class students.

And the fact that he dressed stylishly and, if I remember correctly, kept fairly long hair added to his appeal.

A lot of his students, including many pretty girls, from classes 12th to Master of Arts doted on him. (And boy, didn't we feel jealous?)

Does this happen these days in our ad-backed celebrity hell also known as Marathi urban midddle-class popular culture? I doubt.

I have not read his single book in entirety and never thought much of him as a writer. I never tried to meet him even after I (probably) topped the college in Marathi that year beating 12th arts students.

Here is a letter by him to G A: 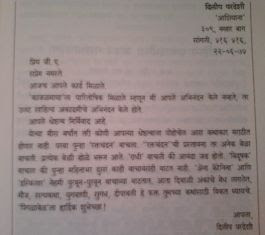