How Much the Mahatma (and his contemporary FDR) Was Like His Image!

Joe McGinniss, July 2012:
"...The Selling of the President is the first account of the marriage of convenience/ménage à trois between national politics, network television, and Madison Avenue...Read The Selling of the President today and be present at the creation of the postmodern era of American politics, one that, I'm sorry to say, I am not sure our republic will survive.”


“...Polio hadn’t vanquished him—in that way, he was truly out of the ordinary—but it had left him completely unable to get himself into a standing position without help or walk under his own power without weighty steel braces on his useless legs, a cane to lean on with his right hand and the strong arm of one of his four sons or bodyguards to cling to with his left. As Mike Reilly, the chief of his Secret Service detail, later acknowledged, “He was a helpless cripple, incapable of walking unaided a single foot.” The fact that he couldn’t cross a room on his own except in one of his specially designed armless wheelchairs—or crawling, as early in his convalescence he’d taught himself to do—remained privileged information, virtually a state secret, all through his White House years. So did the fact that he regularly had to be lifted in and out of cars by the Secret Service like an infant, that he couldn’t get in or out of bed or a tub, dress or undress himself, without the assistance of a valet. Each day demanded fortitude and courage, but that was all strictly off the record, not for public consumption, a barrier that neither the press nor his political enemies were normally prepared to breach.


That wasn’t just courtesy. Roosevelt’s handlers in the White House and the Secret Service actively policed that barrier. It was Roosevelt’s own “absolute edict to the Secret Service, press photographers and the rest of us,” according to his naval attaché, Admiral Wilson Brown, “that he was not to be photographed while being helped to his feet or struggling with his braces to sit down.”...”

To repeat, I quoted from Joseph Lelyveld's excellent book 'Great Soul: Mahatma Gandhi and His Struggle With India', 2011:


"...The stenographer normally handled Gandhi’s correspondence and whipped up the transcripts of his nightly talks at prayer meetings for the small retinue of journalists that trailed him. A pioneer in the art of press manipulation, Gandhi insisted the journalists file not on the words that had actually come out of his mouth but on versions he “authorized” after his own sometimes heavy editing of the transcripts. The journalists—like the armed police detachment assigned by Suhrawardy to protect him—were also instructed to keep a decent distance so that the Mahatma’s sense of his solitary mission would not be compromised..."

This is so funny and reminds me of two books.

On this blog, I have written about P L Deshpande's (पु ल देशपांडे) very popular Marathi play 'Tujhe Ahe Tujapashi', 1957 (तुझें आहे तुजपाशीं). There is a character of Acharya. Aacharya is loosely based on, according to my father and many others, the clones of the Mahatma.  Acharya is in the habit of pausing to say something 'profound' so that his followers get a chance to take out their notebook and pencil to note it down. He even repeats it for their convenience! I feel Pu La is making fun of the kind of behaviour elaborated by Joseph Lelyveld above.

Further proof of the Mahatma's skills in media and image management comes from  Sunil Khilnani’s interview with The Times of India, March 18 2016:

"...Even with Gandhi, I found what an amazing manager of his image he was, how he does the Dandi March, whom he chooses to accompany him, what they wear, the camera crew he takes along, how he sends people in advance to enthuse villagers – Steve Jobs could learn from him!..." 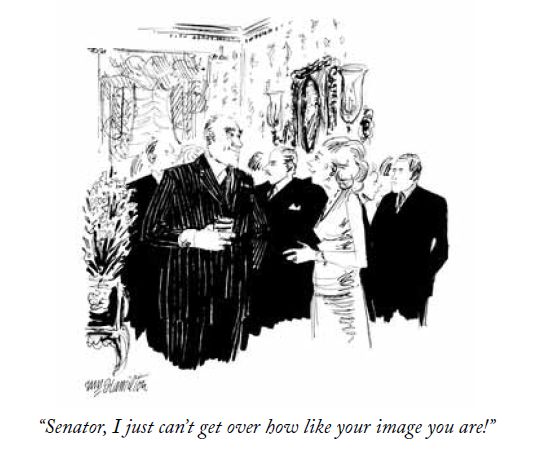