MARC LACEY for NYT (October 9, 2007) says: “In fact, 40 years after his death, Che — born Ernesto Guevara de la Serna — is as much a marketing tool as an international revolutionary icon. Which raises the question of what exactly does the sheer proliferation of his image — the distant gaze, the scraggly beard and the beret adorned with a star — mean in a decidedly capitalist world?”

I read George Orwell’s Animal Farm, translated in Marathi by my father, when I was still in school. I cried when Boxer was taken away to the slaughterhouse. I did not understand that it was a parable for failed Russian revolution.

Then I experienced first hand violent labour union movement of Datta Samant at Mukand Iron and Steel, Kalwa from 1983-84 and Animal-Farm-style-pigs-like-union at Nocil (1984-87). (Nocil, a blue chip, was a much bigger company than Reliance Industries then). Later I also read about membership of Lenin and Mao of “Thirty Million Club”.

I was disillusioned with communism for life at the age of 27.

Graham Greene’s books gave a new pair of glasses for looking at communism. He says Catholics and communists are never indifferent to you and that is their chief quality.

It was not long before disillusionment came with capitalism too.

Greene has said: “The terrifying weight of this (USA’s) consumer society oppresses me”

“…There are 24 million compulsive shoppers in the US. According to a study commissioned by Yahoo!, members of the My Media generation can, by multi-tasking, fit up to 44 hours of activity into one day. With desire propelled in excess of the speed of light anything is possible, hence the growing number of internet addiction disorder clinics in the US. Shopping also functions like pornography, another form of accelerated desire with an emphasis on repetition. For the first time in history, a society has felt its economic survival demands a kind of "controlled regression, a culture that promotes puerility rather than maturation"….

…Benjamin Barber fears that this process of infantilisation, combined with the associated practices of branding and privatisation, threatens democracy. Privatisation has merely privatised corruption and inequality without providing more adequate supplies or even turning much of a profit.”

Petit agrees but warns: “If capitalism continues uninterrupted, then the cure of self-restraint will become another commercial facet of consumerism, like weight-watching or dieting or healthy eating - just another giant business in its own right. “

Capitalism will simply swallow its proposed cure. We have to interrupt capitalism. How? 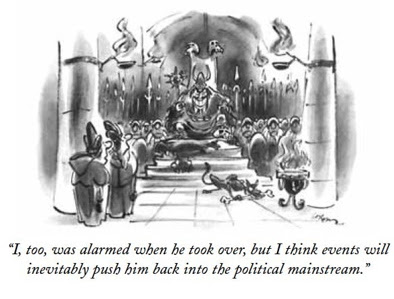 The New Yorker
Posted by Aniruddha G. Kulkarni at 11:49 AM No comments: