Being symbiotic with people

In Indian epic Mahabharata, dog is part of a very moving story.

After fighting bloodiest battle of the time, Pandavas, the victors, began their final journey towards heaven atop Himalayas, a dog accompanied them.

All except the eldest brother- Yudhishthira- died on their way. Only Yudhishthira and the dog reached the door of the heaven. Indra came on his chariot to get pious and truthful Yudhishthira to heaven. Yudhishthira paid his respect to Lord Indra and asked his companion dog to get into the chariot. Indra was shocked, “A dog to heaven?” When Yudhishthira refused to go to heaven without the dog, the God of Death, Dharmaraj Yama emerged out of the dog and blessed Yudhishthira. Yama was testing the steadfastness of Yudhishthira.

If there was any other animal instead of dog, it may not have understood when Yudhishthira motioned it to get into the chariot!

The Economist in Feb 2004 had a story "Sensitive souls" on dogs. Why did dog become man's best friend?

It says: "NO SPECIES has developed a closer relationship with humanity than the dog. But that relationship's basis—what it is about dogs that allows them to live at ease with people—is still little understood. After all, dogs are descended from wolves, which are big, scary carnivores that would certainly have competed with early man for prey, and might not have been averse to the occasional human as a light snack……

sensitivity to human social cues is a recent genetic adaptation that has evolved specifically to allow dogs to enter a new ecological niche—that of being symbiotic with people."

Therefore no amount of teaching or coercion will help a cat to wag its tail! 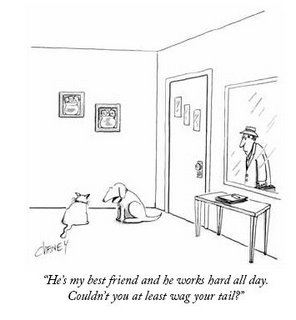