So Long As It Is White or Silver In Fordlândia...Oops India

"Any customer can have a car painted any colour he wants so long as it is black."

"Two in three cars sold white or silver in colour:

Despite a good number of colours and shades offered by car companies, the regal white and silver still reign supreme. What’s more, their number as a percentage of total car sales is only rising.

As many as 62-70 per cent of car sales come in these two colours. The number was 50 per cent five years ago. This is confirmed by the company that leads the passenger car pack, Maruti Suzuki, and tracks changes in colour preferences across the industry. Says Shashank Srivastava, its chief general manager (marketing), “Yes, white and silver still are the most dominant colours for cars. In fact, as a ratio, the share of white has become more than that of silver in recent years.”..." 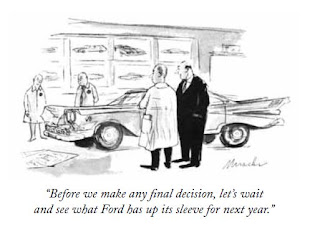 So whatever it is Ford or whichever company has up its sleeve for Indian market next year, it will be in either white or silver!

"These are fictional and factual characters who lived before the events in this book, but are of note in the novel:

Henry Ford, who has become a messianic figure to The World State. "Our Ford" is used in place of "Our Lord", as a credit to popularizing the use of the assembly line. Huxley's description of Ford as a central figure in the emergence of the Brave New World might also be a reference to the utopian industrial city of Fordlândia commissioned by Ford in 1927."
Posted by Aniruddha G. Kulkarni at 9:00 AM No comments: Links to this post