I had to know who Ms Weil was when I read her this quote some time ago: “All the tragedies which we can imagine return in the end to the one and only tragedy: the passage of time.”- reminiscent of कालमूलमिदं सर्व भावाभावौ सुखासुखे॥ (महाभारत १/१/२४७) [Mahabharat 1/1/247: Living and death, happiness and sadness all originate in time.] 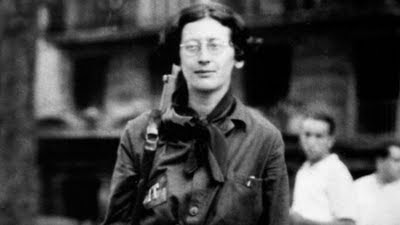 Simone Weil, pictured above, believed that the only antidote available to the sickness of the modern world caused by up-rootedness is a social order grounded in physical labour. Read a memorable essay by Peter Foges here.

Great Bhakti poet Janabai (c 13/14th century), a Dalit, worked all her life as a maid, doing all kind of menial work.

I don't know if Janabai would agree with Ms. Weil or not but she used to unite with her Lord Vitthal while doing her work and not while praying. In fact, she felt it was her Vitthal who was doing all her work.

This is what Janabai said:

[When Jani swept the floor, her Lord (Chakrapani) gathered up the dirt.
Carried the basket over his head, to dump it in the distance.
infatuated by the devotion, started doing lowly work.
Jani says to (Lord) Vithoba, how do I thank you enough.]

"Weil herself was preternaturally a worker by brain, not by hand. Small, myopic, physically awkward and weak, it is difficult to think of anyone less suited to toil in a factory, workshop or field."

We don't know about physical qualities of Janabai. Maybe even she too was "small, myopic, physically awkward and weak". But that didn't stop her from embracing her daily backbreaking routine as a kind of communion with her god.

"Weils's uncompromising attitudes, disheveled physical appearance, monotonous voice and lack of almost all conventional social grace did her few favors, but she eventually managed to find employment in a steel plant, an experience that proved physically, emotionally and spiritually shattering. It seared her like a branding iron."

For Janabai, my guess is, such an experience would have been "physically, emotionally shattering" but not "spiritually".

“What a factory ought to be” Weil wrote to a friend, “is a place where one makes hard painful but joyous contact with real life. Not the gloomy place it is.”

I don't know if Janabai has called her workplace "gloomy". And even if she had felt it to be gloomy, she would have called upon Vitthal to help her as she does here:

(My lovely grindstone, how sweetly it spins
as I sing your praise, Come to me, Vitthala

Twin poles of World and Spirit, are the smooth wooden handles
my five fingers grasp by turns, Come to me, Vitthala)

"At the same time the spiritual Simone was becoming increasingly mystical and Christian —she drew close to the Catholic Church in her later years, but resisted the final baptismal step. This led her to crave release from academia and the abstract life of the mind and lose herself in obedience. Like early medieval mystics, Saint Teresa of Avila or Saint John of the Cross, she prayed that her individuality be obliterated by the necessities of toil, that her intelligence might be extinguished through punishing physical fatigue. At times she turned for solace and inspiration to the Bhagavad-Gita and other sacred Hindu texts. (Did she read Janabai?) These notions—anathema to left-wing French intellectuals then and now—became her vocation. Like Leo Tolstoy, she saw a connection between physical fatigue and spirituality, and hoped, however foolishly, to have a religious experience on the factory floor. “Physical work” she wrote in her best known book Gravity and Grace, “makes us experience in the most exhausting manner, the phenomenon of finality.” Workers, she wrote, “need poetry more than bread, and religion alone can be the source of it.”

Perhaps the purest expression of Weil’s mystical notion of the sanctity of physical labor comes at the end of her essay “La Condition Ouvrière,” published, as were most of her writings, long after her death. “If man’s vocation is to achieve pure joy through suffering, manual workers are better placed than all others to accomplish it in the truest way.”..."

Peter Foges says Weil "hoped, however foolishly, to have a religious experience on the factory floor".

I don't think it was foolish at all. Going by Janabai's experience, Weil was on the right track. 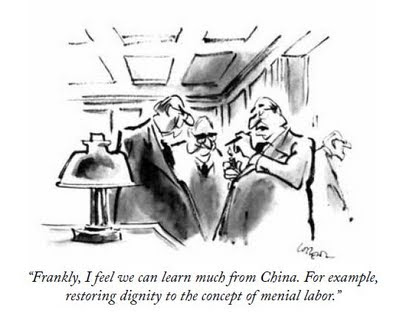