Sangeet Manapman, one of the greatest Marathi entertainers will be 100 soon!

Sidney Poitier: “…One of the reasons Marlon Brando was so brilliant, particularly at his beginning, was that when you watched him on stage, you didn't think you were watching people on the stage. You would think you were peeking in on someone's life because what he did with the words, he made them so real that that audience gets swept up."

George Orwell:”The only true test of artistic merit is survival.”

(The only rivals of these two are Loknatya /Tamasha performed by the likes of Dada Kondke दादा कोंडके among a few others.)

I have yet to hear a better music album than that...and one of the best songs ever 'Prem Seva Sharan' (प्रेम सेवा शरण) sung by Asha Bhosle (आशा भोसले) and earlier her father Dinanath Mangeshkar (दीनानाथ मंगेशकर)... (My father wrote the first biography of Mother Teresa in Marathi. Its title: 'प्रेम सेवा शरण' 'Love, Service, Surrender')

Baldanharva's only daughter died on the morning of March 12 1911 but the show went on... 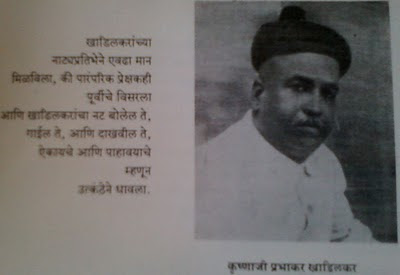 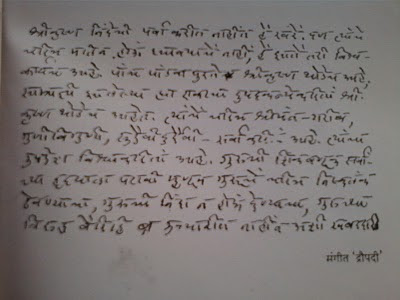