(Today Vasant Sarwate वसंत सरवटे one of the chief inspirations for this blog and who has appeared here dozens of times turns 84.

There is a conspiracy to eliminate me through black magic."

“…the (Indian) Prime Minister Manmohan Singh revealed how the BJP had tried to invoke divine forces not just to unseat him, but to kill him.

“They (BJP) didn’t even believe I would last as the PM and some leaders even did havans that I should die on a certain day,” said Manmohan Singh in an interview to India Today three months ago but published today…”

(More than 3 years later, BJP is trying to unseat him using other means!)

“The former (Karnataka) Chief Minister B. S. Yeddyurappa on Monday charged the former Prime Minister H.D. Deve Gowda and his sons with resorting to “black magic” to finish him off.

“I am facing a threat to my life. I know the places where they did pujas under black magic. I will write to the Home Department on Tuesday complaining against the black magic of Mr. Gowda and his sons. They will be responsible if anything happens to my life,” he said.

He said he would also write a public document in this regard.”

I wonder if this "public document" has come in public domain after more than 3 years.

I have seen this all in corporate world.

Then, 1989-92, I worked for a major multi-national company in Eastern India. Wife of its Managing Director firmly believed that her husband was the target of Bhanamati, black magic and related stuff.

And who was doing it?

None other than his own sister!

Mantrik used to often visit them and objects like bones (animal or human?) were hung at different places to counter the magic. 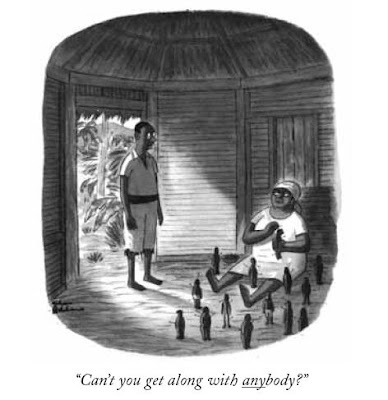 My caption: "Honey, Stop wasting your time here. Pack Your needles. You have a plum job waiting in Bangalore."
Posted by Aniruddha G. Kulkarni at 9:00 AM No comments: