Maharishi Yogi, Did You Make a Fool of Everyone?

Maharishi Mahesh Yogi, who is credited with introducing the Beatles and other stars to ancient Hindu meditation methods, died on February 5, 2008. He introduced the Transcendental Meditation movement to the West in 1959, with the intention of creating individual peace and enlightenment.

By the time of his death, it had grown into a multi-million dollar empire.

Indian newspapers- including Marathi Sakal- have been laudatory of him. As always not a word of skepticism.

This is what Carl Sagan said about Maharishi:

“…Perhaps the most successful recent global pseudoscience - by many criteria, already a religion - is the Hindu doctrine of transcendental meditation (TM).

The soporific homilies of its founder and spiritual leader, the Maharishi Mahesh Yogi, can be seen on television. Seated in the yogi position, his white hair here and there flecked with black, surrounded by garlands and floral offerings, he has a look.

One day while channel surfing we came upon this visage. "You know who that is?" asked our four-year-old son. "God." The worldwide TM organization has an estimated valuation of $3 billion. For a fee they promise through meditation to be able to walk you through walls, to make you invisible, to enable you to fly. By thinking in unison they have, they say, diminished the crime rate in Washington, D.C., and caused the collapse of the Soviet Union, among other secular miracles.

Not one smattering of real evidence has been offered for any such claims.

TM sells folk medicine, runs trading companies, medical clinics and "research" universities,and has unsuccessfully entered politics. In its oddly charismatic leader, its promise of community, and the offer of magical powers in exchange for money and fervent belief, it is typical of many pseudosciences marketed for sacerdotal export…”

His former disciple John Lennon admitted to "an error of judgement", writing the scathing "Sexy Sadie" about him.

One sunny day the world was waiting for a lover
She came along to turn on everyone
Sexy Sadie the greatest of them all.

We gave her everything we owned just to sit at her table
Just a smile would lighten everything
Sexy Sadie she's the latest and the greatest of them all.

She made a fool of everyone
Sexy Sadie.

However big you think you are
Sexy Sadie. 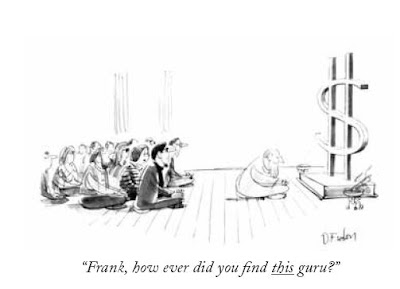