“……It said a great deal for Smith that he did not allow the misfortune to throw him off balance. Bowling more carefully, he delivered the rest of the over to the order. Five balls went down, each of them swinging into the batsman. Three of them Troughton was able to leave alone, as they swung across his body and down the leg side, making Deacon leap and stretch to stop them from going for byes. True, Troughton played carefully, once going right up on his toes to bring the ball down on to the pitch in front of him with the straightest of the bats, dropping his wrists and slackening the fingers round the bat handle. The seventh, aimed straight at the middle stump had Troughton driving across the line trying to work it away to mid-wicket. It moved off the pitch again, but this time in the other direction, touching the outside edge of the bat as it went and winging its way chest high to Gauvinier at first slip- a straightforward, finger-tingling slip catch. He flung the ball high in delight- for himself, for Norman, for the ball, for the catch, for the score and for the sheer joy of cricket”
( “The Village Cricket Match”, 1977 from cricket anthology “The Joy of Cricket” Selected and Edited by John Bright-Holmes)

[In my imagination, all the players in the quote above- Smith, Troughton, Deacon, Gauvinier, Norman- are black West Indies players.]

Commerce keeps raising her unlovely head in this beautiful game but who am I to disparage illusions of their gold?

But then the team like West Indies rescues the game of cricket once in a while from their clutches. I think many Sri Lankans were happy to see WI win the T20WC on the night of October 7 2012.

Batting of Chris Gayle and Marlon Samuels over the past week brought back memories of Vivian Richards, Clive Lloyd and the late Roy Fredericks.


Thank you, West Indies once again for splendid, care-free cricket and,  even more, for Gangnam Style celebration after that. 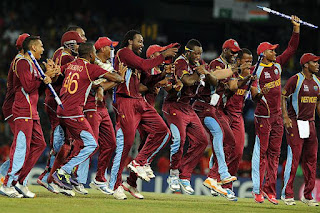 Image courtesy: The Sun, UK
Posted by Aniruddha G. Kulkarni at 9:46 AM No comments: