And Where is C. Ramchandra in All That Jazz?

Juned Shaikh:"...a play on unemployment during the Great Depression of the 1930s had dialogue by the communist leader D S Vaidya and songs composed by S R Gaikwad and Baburava Garud. The music for the play was composed by Hindi film musician C Ramchandra."

Ashok Da Ranade (अशोक दा रानडे ) on C. Ramchandra:
"He was unforced in everything he did and his relaxed putting forth or the ease in musical mapping was passed on through his music to listeners- they really enjoyed the music even when they were moved to tears! His music is accessible to almost everybody - not because of musical dilution but because he is able to communicate with sufficient technical expertise and concealed skill. He had the courage to go against the rigid Indian school of Hindi music as he never felt the necessity to prove credentials of his own musical Indianness! Finally, he was content to be an artist and never took to waving of flags and raising slogans against cultural invasion Indian musical traditions, etc.!"
('Hindi Film Song: Music Beyond Boundaries')

“I had heard the musically erudite S D Burman acknowledging when Dada commended C Rramchandra as the westernised model to son R D:’ if you must go modern , Pancham, study the vistas explored by Chitalkar as a composer’. No wonder there was an uproar when I hailed R D Burman as the ‘C Rramchandra of the 1970s’ in my Filmfare ‘On Record’ column. Fans were up in arms , arguing that Pancham was not a patch on the Mr. Jaan original! That was then. Today Pacham is recognized as ‘the jet’ setter supreme. While C Ramchandra is a mere name to a generation whose understanding of music extends only from R D Burman to A R Rahman.”

The highest accolade I can give to RD: He was as good as C Ramchandra!

Book "Taj Mahal Foxtrot" by NARESH FERNANDES has been favourably reviewed by 'The Caravan' December 2011 and Frontline April 6 2012.

It is, as Mr. Vijay Prashad writes in Frontline, "A history of jazz from the point of view of the performers, musicians who lived humble lives and often died as unknown workers in the trade."

"Drawing from scholars such as Bradley Shope and others, Naresh Fernandes' book pivots away from the musicians themselves to make an important claim. Jazz might have begun its career to anaesthetise the elite, but it would soon slip through these working-class musicians into the world of mass Hindi cinema. Many of these musicians would help orchestrate the early Bollywood sound or, as with Albela (1951), bring jazz into the film." (Frontline)

"What happened to Frank Fernand? To Micky Correa? To innumerable other musicians who were hired and fired from bands that enjoyed fleeting fame on glamorous stages?

The short answer is: the movies. The Bombay film industry found a musical space for the accomplished practitioners of alien instruments like the trumpet and the saxophone. Fernandes writes eloquently of Chic Chocolate’s tentative screen debut in a 1951 film called Albela. He played himself, a trumpet player who made the main cast feel good and wake up to naughty possibilities" (The Caravan)

There is a mention of Albela in both the reviews but there is no mention of its music composer C. Ramchandra (रामचंद्र नरहर चितळकर), 1918-1982.

Doesn't he deserve some credit in deploying that sound and taking it to the masses?

In words of Dr. Ranade:

"C Ramchandra introduced Benny Goodman-style Jazz clarinet phrasing, combining it with Indian melody in film Shahnai ('Ana Meri Jan meri jan, Sunday ke Sunday') thereby 'flodding' listners' ears! Anil Biswas reportedly rang up C. Ramchandra to reproach him and asked him, "What do you think you are doing and why?" C. Ramchandra's coolly cryptic answer was, "I am doing what I am doing because I want my songs to sound as my songs and not like Anil Biswas'!" Anil Biswal could only say, "Please go right ahead" and put down the receiver, and sigh deeply!"

And returning to the comment of Dr. A D Ranade at the top:

"He was unforced in everything he did and his relaxed putting forth or the ease in musical mapping was passed on through his music to listeners- they really enjoyed the music even when they were moved to tears!" 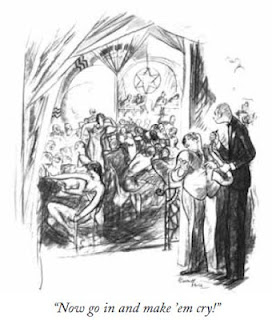 "Now go in and make 'em cry!"? CR sure did with his many Jazz instruments just like the musician above!

My father was (is) a great fan (nut) of Raj Kapoor. Like loyal fans he was biased. Big time biased. He seldom mentioned Guru Dutt to us then.

I was bewitched by its beauty and its music. Acting is clearly not its forte. But its beauty is ethereal. And if I have to choose one thing from that movie it would be the song "Hum aapki aankhon me". Piano from that song keeps playing in my mind. 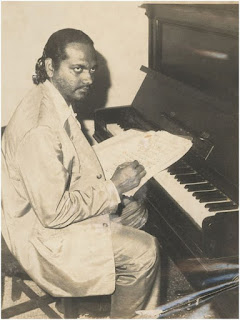 Music composer Anthony Prabhu Gonsalves came to Bombay in 1943 from the coastal village of Majorda in south Goa. At 16, he was hired by the famous music director Naushad as a violinist in his group.

Gonsalves was a major influence on Hindi film music of the 1950s and 1960s, lending a Goan touch to then Hindustani sounds of Bollywood. This mellifluous blend can be heard in compositions like ‘Hum aapki aankhon me’ for Pyasa, and ‘Ayega Aanewala’ for Mahal.

Among his students were legends like RD Burman and Pyarelal. In 1977, Pyarelal paid tribute to his mentor with the Amar Akbar Anthony song, ‘My name is Anthony Gonsalves’.