“Worldwide there is increasing demand. There turns out to be prosperity in the developing world, which is good. It also, however, increases demand. So, for example, just as an interesting thought for you, there are 350 million people in India who are classified as middle-class. That’s bigger than America. Their middle-class is larger than our entire population. And when you start getting wealth, you start demanding better nutrition and better food, and so demand is high, and that causes the price to go up.” (May 2008)

“…The population especially of the developing world is growing, and some people remain fixated on this. They note that populations of countries like Kenya are growing rapidly, and they say that’s a big problem. Yes, it is a problem for Kenya’s more than 30 million people, but it’s not a burden on the whole world, because Kenyans consume so little. (Their relative per capita rate is 1.) A real problem for the world is that each of us 300 million Americans consumes as much as 32 Kenyans. With 10 times the population, the United States consumes 320 times more resources than Kenya does…” (January 2008)

R K Laxman did some research among Indian poor and discovered: 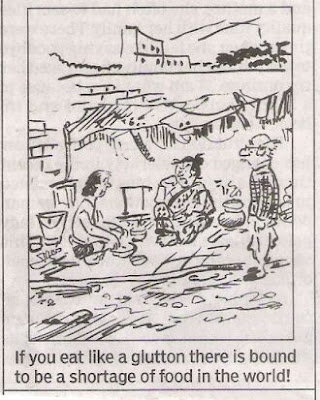