Does Teenage Pune Forget to Wear a Condom?

Newsweek December 10, 2007 has an interesting story:
“A Special Delivery/With all the films about unplanned pregnancy this year, 'Juno' is the only one to discuss abortion.”

“This may go down as the year Hollywood forgot to wear a condom. Several prominent films—"Knocked Up," "Waitress," "Bella," "Margot at the Wedding"—feature women who unexpectedly find themselves in the family way. While they react to the news with varying levels of delight and/or despair, sooner or later they all accept their condition, as though motherhood has been a fait accompli from the moment of fertilization. Then there's the 16-year-old at the heart of "Juno." After downing gallons of Sunny Delight to facilitate multiple pregnancy tests, Juno MacGuff does what most women do in her circumstances: she calls her best friend. Then she has an awkward conversation with the baby's father. But finally, she does something hardly any other pregnant character in a film has done since Roe v. Wade: she goes to an abortion clinic.

Hollywood is generally assumed to be a bastion of political liberalism, but when movie characters find themselves unintentionally pregnant, one of two things happens: they keep the baby, or they conveniently miscarry. "Juno" is the only film in recent history in which the protagonist seriously considers termination. ..”

After I read this, I asked my wife if she remembered any Hindi or Marathi film where a leading lady went for the abortion of an unwanted pregnancy.

Both of us couldn’t recall a single instance.

In Hindi films too, "they keep the baby, or they conveniently miscarry." See related entry on this subject here.

The number of teenagers and young unmarried women going for abortions has risen sharply in Pune, sparking concern among gynaecologists over unsafe and unprotected sex…

While the members of the society said it was difficult to count the actual number of teen abortions in the city, they agreed that the number has risen sharply…”

I had read in the past how abortions among teens went up few weeks post-Navratri.

However, Times of India reported in October 2005:

It's a revolution of sorts. Social researchers waiting to dish out those cliched surveys on abortion rates after Navratris in Gujarat, are in for some disappointment. Because revellers, especially girls, are shedding inhibitions and walking up to the neighbourhood chemist asking for condoms.

And invading the market are the Cobras, Draculas, Skinless Skin — all brands of condoms from China. With the nine nights of revelry having peaked over the week-end gone by, chemists are confessing that condom sales are up by up to 50 per cent…”

Considering that Hindi films tend to have a lot of influence on Indian teens and that, like Hollywood films, they can’t show abortion, I hope they promote use of condoms to Indian teens. 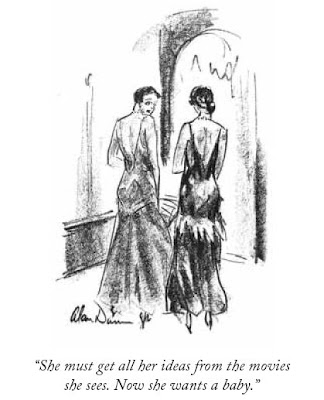 Artist: Alan Dunn The New Yorker 11 January 1930
Posted by Aniruddha G. Kulkarni at 8:50 AM No comments: Links to this post