Chopin could not compose unless he was coughing blood.

In picture below a mother is consoling her tearful daughter after viewing "The Song of Bernadette" (based on a novel by Franz Werfel and winner of four Oscars in the 1943) that Bernadette would not have suffered as much as she did (tuberculosis of the bone) if penicillin was available in 1858.

So is tuberculosis-causing bacteria all evil?

Chris Lowry, of Bristol University, and his colleagues think a particular sort of bacterium might alleviate clinical depression. The Economist (April 7,2007) reports: “Dr Mary O'Brien was trying out an experimental treatment for lung cancer that involved inoculating patients with Mycobacterium vaccae. This is a harmless relative of the bugs that cause tuberculosis and leprosy that had, in this case, been rendered even more harmless by killing it. When Dr O'Brien gave the inoculation, she observed not only fewer symptoms of the cancer, but also an improvement in her patients' emotional health, vitality and general cognitive function.”

In response to this, Dr Dermot Kennedy has written a letter to the magazine (May 12, 2007): “Your article on the unexpected improvement to patients' emotional health after they were injected with a bacterium recalls a similar effect that has been long identified in people suffering from tuberculosis. Known as Spes phthisica, or the euphoria of the tuberculous consumptive, this partly explains the disease's impact on a long list of aesthetes, including George Orwell, D.H. Lawrence, Franz Kafka, and Amedeo Modigliani. Frédéric Chopin complained that he could not compose unless he was coughing blood. John Keats, “With anguish moist and fever dew”, poured out his ineffable poetry as the disease accelerated. An interesting aside to this is the aphrodisiac effect of tuberculosis, so familiar to staff working in sanatoriums. As a nursing sister in my hospital once said, “You need a blowtorch to separate them.”

In India too history of creative arts is full of interesting characters suffering from tuberculosis. Do they all owe part of their greatness to the bugs? And who would have thought you could do with small amount of free bacteria instead of expensive Viagra? 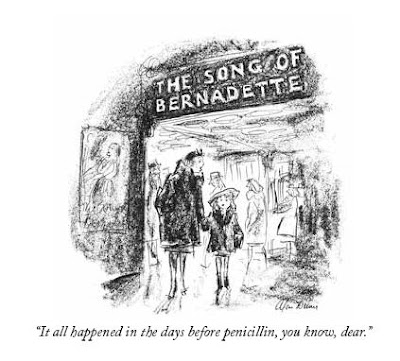 Artist : Alan Dunn The New Yorker 4 March 1944
Posted by Aniruddha G. Kulkarni at 12:04 PM No comments: Links to this post