In last post, we visited the first decade of 20th century. Will continue there a bit longer...

Then my mother's mother, Manu Karandikar, sang following song at her school, praising and well-wishing her emperor- George V of the United Kingdom- almost every day.

I remember having heard a few lines of it from her mouth. (She spoke such witty, stylish Marathi)

Manu-tai was in illustrious company.

Wikipedia informs: "George was the only Emperor of India to be present at his own Delhi Durbar, where he appeared before his Indian subjects crowned with the Imperial Crown of India, created specially for the occasion...King George V and his Queen sat on golden thrones under a golden umbrella on 11 December 1911 when they proclaimed that the capital of British India would be shifted from Calcutta to Delhi..."

The Durbar was an extravaganza of pomp but fortunately it was the last one.

I wonder what my grandma would have made of following information about her emperor.

"...George was sent away from home at an early age to join the navy where he spent a miserable, sea-sick time. He was frightened of his father and resented his ill-concealed affairs. He adored ‘motherdear’, who alternated between stifling affection and cheerful neglect. When his beloved older brother, Eddy, died suddenly of pneumonia he found himself to his dismay the heir to the throne. (He also found that he had a fiancée when his parents decided that there was no point in wasting the work that had gone into arranging Eddy’s engagement.) ‘Oh such a piteous, good, feeble, heroic little figure,’ was Max Beerbohm’s assessment of one of George’s first appearances as king in 1910...

...As for George V, as constitutional monarch and an inexperienced one at that, he had virtually no power at all, less even than his grandmother Queen Victoria or his father Edward VII...

...Carter shows how hereditary monarchies made their contribution to the disaster. It’s enough to make one a republican..." (Spectator, September 2, 2009) 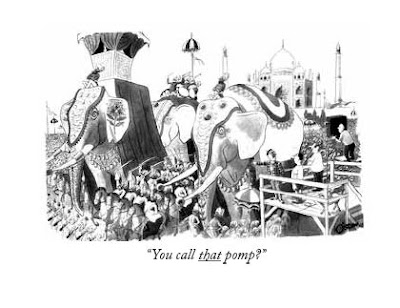