Today May 11 2012 is 100th Birth Anniversary of Saadat Hasan Manto, one of the greatest South Asian writers of 20th century.

“IF you are not familiar with the age in which we live, read my stories. If you cannot endure my stories, it means that this age is unbearable.”

I knew very little about Saadat Hassan Manto until 2012. Since then I have bought books- both Hindi and English- that contain most of his short stories.

Those stories are some of the best I have read.

For instance, Manto is as good as the best Marathi has to offer- writer like G A Kulkarni (जी ए कुलकर्णी)- in this genre.

I have seen a couple of Marathi translations of his work but wonder why Manto is not as popular or not as much read by Marathi speaking people as he should be. They should claim Manto their own because many of Manto's stories are based in Mumbai and Pune!

His shadows of Bombay life- darker and more intriguing than the one sees in Chetan Anand's 'Taxi Driver', 1954- were later claimed and celebrated by others, most notably Bhau Padhye (भाऊ पाध्ये) in Marathi.

It is also surprising considering that there are so many ardent fans, among native Marathi speakers, of Gulzar and Amrita Pritam: for my taste, both ordinary writers compared to Manto.

I probably know one reason why Manto is treated thus: His most popular stories evoke and define the Partition, one of the greatest human tragedies since the start of the history and the fact that he migrated to Pakistan after 1947.

The Partition is almost a taboo with most middle-class Indians. They don't want to know any more about it than what has been told- very little- to them in school texts.

One of his popular stories is “Toba Tek Singh”.

Anatol Lieven writes about it:

"The signature story is a masterpiece of allegory with touches of surrealism. It’s also a very powerful human story. Toba Tek Singh is the story of a lunatic asylum from British days in India, which after partition ends up on the Pakistani side of the border. In this lunatic asylum there is this Sikh called Bishan Singh from the village of Toba Tek Singh. His family flee to India and he’s left behind in Pakistan. A few years after partition – this is where you can see Manto’s deep regret about partition and where his anger and despair comes in – the decision is made that the Hindu and Sikh lunatics and the Muslims lunatics also have to be partitioned and that the Hindu and Sikh lunatics have to be sent to India. He refuses to go because he realises that he is going to be separated forever from his beloved Toba Tek Singh. When they try to drag him he throws himself on to the ground and the authorities leave him there for the night. In the morning, the implication is that he’s dead, with his body straddling the border between India and Pakistan."

No one tells us what exactly we lost in the Partition better than Manto.

But personally I like his stories that portray man-woman relationships better. A few of them are sensuous, real turn-ons. They remind me of love stories from ancient Indian literature in Sanskrit, Prakrit, Pali etc. 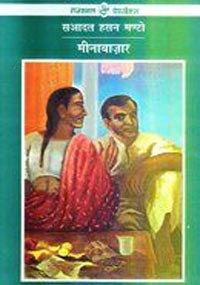 courtesy: Rajkamal Prakashan
Posted by Aniruddha G. Kulkarni at 9:00 AM No comments: Links to this post