Most Marathi newspapers, quite rightly, don't give a damn to Golf. Not even to Golf WAGS or Golf widows. (I wonder why they care about Tennis as much as they do.)

But even they couldn't resist this.

On December 14 2009, English newspapers reported: One of Tiger Woods's alleged mistresses says the superstar golfer was in bed with her the night his father, Earl, died on May 3, 2006.

I didn't know that Mr. Woods has been compared to Mahatma Gandhi.

"...Earl Woods, pressed to justify his belief that his son could have greater humanitarian influence than Nelson Mandela, Gandhi, or the Buddha, explained that Tiger "has a larger forum than any of them. Because he's playing a sport that's international."...

...It is not crazy to suggest that Tiger Woods' discipline and unity of purpose—year-to-year, day-to-day, second-to-second—has been matched by only a few people, including Gandhi. Of course, the two men's goals differ. Gandhi was devoted to human understanding and world peace. Tiger is devoted to being the best ball-whacker ever. But give him time. Maybe he'll branch out."

But today, if the allegations are true, a 'sorry' episode in Gandhi's life, and not human understanding or world peace, have brought them together.

Here is how Gandhi describes it in his autobiography or 'The Story of my experiments with truth' (1927):

My wife, poor thing, was fast asleep. But how could she sleep when I was there? I woke her up. In five or six minutes, however, the servant knocked at the door. I started with alarm. "Get up," he said, "Father is very ill." I knew of course that he was very ill, and so I guessed what "very ill" meant at that moment. I sprang out of bed.

"What is the matter ? Do tell me !" "Father is no more." So all was over ! I had but to wring my hands. I felt deeply ashamed and miserable. I ran to my father"s room. I saw that, if animal passion had not blinded me, I should have been spared the torture of separation from my father during his last moments. I should have been massaging him, and he would have died in my arms. But now it was my uncle who had had this privilege...

...The shame, to which I have referred in a foregoing chapter, was this shame of my carnal desire even at the critical hour of my father"s death, which demanded wakeful service. It is a a blot I have never been able to efface or forget, and I have always thought that, although my devotion to my parents knew no bounds and I would have given up anything for it, yet it was weighed and found unpardonably wanting becuase my mind was at the same moment in the grip of lust.

I have therefore always regarded myself as a lustful, though a faithful, husband. It took me long to get free from the shackles of lust, and I had to pass through many ordeals before I could overcome it..."

Gandhi was a 'lustful, though a faithful, husband'. And Tiger?

"...In other words, Woods has been presented as the embodiment of bourgeois virtues: dedication, hard work, single-mindedness...

For millions of people—many of them, to be sure, affluent middle-aged white guys—Woods embodied an approach not just to golf but to life..."

Maybe this 'embodiment of bourgeois virtues such as dedication, hard work, single-mindedness' just slept in the wrong apartment. One more time... 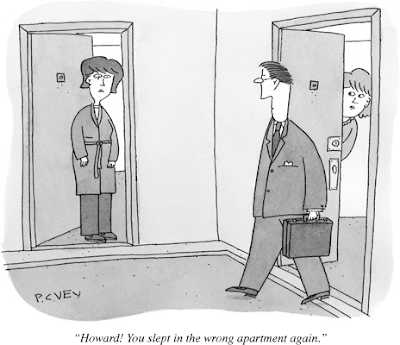 Artist: P C Vey, The New Yorker, March 2008
Posted by Aniruddha G. Kulkarni at 9:00 AM No comments: Links to this post