Long, Cruel Road to the Slaughterhouse. My Own Rude Awakening.

“…Across the world, more than a billion live animals are transported every week, many over long distances. In shocking footage (available here), animals including horses, pigs, sheep and chickens are seen being transported thousands of miles across the world, when they could as easily be carried as meat.

Thousands of animals die en route from disease, heat exhaustion, hunger and stress. The others escape the intolerable conditions only to confront, immediately, the butcher's knife…

… In Spain, thousands of horses are illegally crammed into lorries for a sweltering 46-hour journey to Italy. Canadian pigs, in conditions just as obscene, are condemned to a 4,500-mile journey by land and sea to Hawaii, so that, when slaughtered, their carcasses can be sold as "Island Produced Pork". For nine days, hundreds of pigs are crammed together in the dark, standing in their own excrement. Exhausted and hungry, they become ill, vomiting from motion sickness and waiting for long periods without food…

… Australia sends four million live sheep every year on the barbaric journey to the Middle East. They are transported in such cramped conditions that many die of suffocation on the way. On arrival, they are killed according to Halal butchery laws. “ 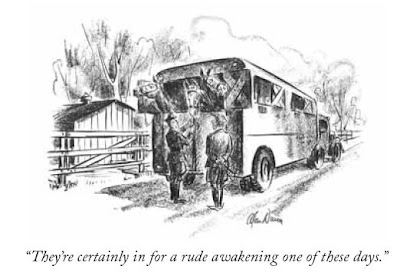 p.s This picture also brought to my mind the final journey of Boxer in George Orwell’s “Animal Farm”.
Posted by Aniruddha G. Kulkarni at 5:30 AM 2 comments: