Crucifixion may not be that Bad but Christ is Still Suffering

…It is learnt that he said that Jesus's scourging was a "blessing in disguise" because it hastened his death.

…"If the New Testament account is to be believed it took him only three hours to die whereas a lot of those killed by this hideous mode of execution thrashed around on their crosses for days," he added.

The paper reports that Prof. T. Eagleton concluded his talk with an attack on contemporary Christianity, claiming that it had abandoned the poor and dispossessed in favour of the "rich and aggressive".

This brought to my mind following lines:

“…So again success is the only petty criterion of the truth! He gave message of love and peace, but it spread with the force of sword; he asserted lack of desrire, but now his religion’s support is wealth. Do you think this is his victory, if seen his true followers will not exceed population of a village. But then does it reduce importance of his teachings?”

How to rationalize obscene inequalities between rich and poor? Using god - someone up there!

As long this inequality exists, Christ will continue to suffer. Remember what Steven Weinberg has said: “I have never understood why untalented people deserve less of world’s good things than other people.” 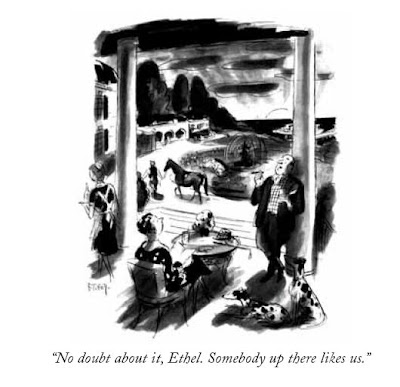 Artist: Barney Tobey The New Yorker 19 September 1959
Posted by Aniruddha G. Kulkarni at 5:30 AM 9 comments: Links to this post