Empower the the Election Commission to Ban the Nonelected Expression!

"...When asked by Lysias the pharmacist if he believed in the gods, Diogenes the Cynic  replied, “How can I help believing in them when I see a god-forsaken wretch like you?” When he was asked what was the right time to marry, he said, “For a young man not yet, for an old man never at all.” When asked what was the most beautiful thing in the world, Diogenes replied, “Freedom of speech.” Sadly, it remains one of the most dangerous..."


Almost all the political parties in India are against some expression or the other-   by artists or ordinary citizens like me, who are nobody. Artists get police protection and media attention. I am left to fend for myself.

"Political parties that wish to contest local, state or national elections are required to be registered by the Election Commission of India (EC). In order to gain recognition in a state, the party must have had political activity for at least five continuous years, and send at least 4% of the state's quota to the Lok Sabha (India's Lower house), or 3.33% of members to that Legislative Assembly of that state..."

If so, why not empower the EC of India to ban any expression that is not acceptable to even one political party.

That is, we can have a transparent online process where a recognized political party raises an objection to a particular expression...TV channels get the live feed of that...They start running the story if it's TRP- worthy...Democracy at its best....political parties represent people....elections and media are the backbones of any democracy...the EC gets the final vote on the subject..

Jonathan Jones writes on his Art Blog in The Guardian 'Dirty old masters: should the EU ban pornographic paintings?':

"...Europe's greatest art has long been an aid to, and celebration of, sexual fantasy. Will a ban on porn affect our art heritage?...Europe's great artists were making pornography long before the invention of the camera, let alone the internet. In my new book The Loves of the Artists, I argue that sexual gratification – of both the viewers of art, and artists themselves – was a fundamental drive of high European culture in the age of the old masters. Paintings were used as sexual stimuli, as visual lovers' guides, as aids to fantasy. This was considered one of the most serious uses of art by no less a thinker than Leonardo da Vinci, who claimed images are better than words because pictures can directly arouse the senses. He was proud that he once painted a Madonna so sexy the owner asked for all its religious trappings to be removed, out of shame for the inappropriate lust it inspired. His painting of St John the Baptist is similarly ambiguous...." 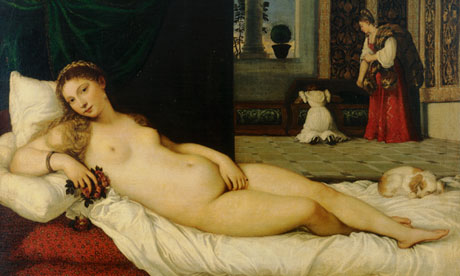 The Venus of Urbino by Titian.

Many Indians were/are  well familiar with the sentiments expressed above:

"Paintings were used as sexual stimuli, as visual lovers' guides, as aids to fantasy. This was considered one of the most serious uses of art by no less a thinker than Leonardo da Vinci, who claimed images are better than words because pictures can directly arouse the senses."

I fell ill in Kolkata in 1991 supposedly by amebiosis...its water they said, its weather some others. Some advised to go to "the West" for change of water and weather.

We went to  Khajuraho coinciding with the annual dance festival there.

But the flesh and blood were no match for the stone. Not only I was cured in a day, I was massively turned on by what I saw on the temple walls there. I was back...(I won't go further than this to protect my wife's privacy.)

Today,  as I suffer from high blood pressure, I wonder where I should go to "snap out of it"! Khajuraho does not sound right but who knows! 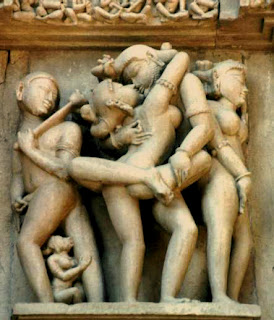