The article may make some of us not swallow our food.

“…There are times when the tragedy is particularly gory—as during the Gujarat riots of 2002, which, after someone set fire to a train carrying Hindu travelers in a town named Godhra, killing 59, saw the massacre and rape of more than 2,000 Muslims by Hindu zealots.

…2002 killings had been planned, had enjoyed the sanction of the state and its chief minister, Narendra Modi, as well as the collusion of the police. Later on, the process of justice had been effectively manipulated to keep those responsible out of jail.

The evidence was graphic. Mass murderers appeared on camera, describing how they killed, why they killed and who helped them kill…”

“…Any nondoctrinaire Indian can see that a serious schism between its 900 million Hindus and about 150 million Muslims would tear the country apart.

… The fact is India cannot be fixed through economic initiatives alone. It needs great political vision. And there are no signs of that. Yes, India is highly resilient, which allows the management of great contradictions and crises. But in the coming years, this resilience will be tested as never before.”

I agree with Tejpal's conclusion but I think he still underestimates India's resilience. Often in the past, India looked similar to what it looks today but it persists, largely because of sway of Bhakti/ Sufi movement over Indian masses.

Can likes of Tejpal with their pens fight Excalibur of Modi? We shall see. 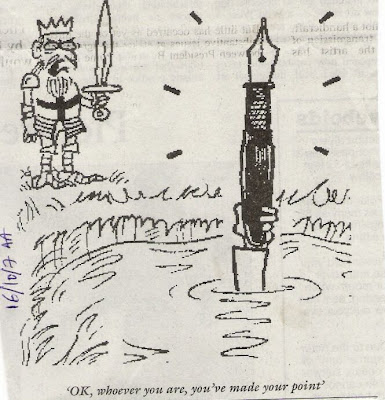 The Spectator 2007
Posted by Aniruddha G. Kulkarni at 9:00 AM No comments: Links to this post