Has The Story of All of Us Changed Much?

David Hume (‘Of Liberty and Necessity’ in the first Enquiry):


"...It is universally acknowledged that there is a great uniformity among the actions of men, in all nations and ages, and that human nature remains still the same in its principles and operations. The same motives always produce the same actions: The same events follow from the same causes. Ambition, avarice, self-love, vanity, friendship, generosity, public spirit: these passions, mixed in various degrees, and distributed through society, have been, from the beginning of the world, and still are, the source of all the actions and enterprises, which have ever been observed among mankind. Would you know the sentiments, inclinations, and course of life of the Greeks and Romans? Study well the temper and actions of the French and English: You cannot be much mistaken in transferring to the former most of the observations which you have made with regard to the latter. Mankind are so much the same, in all times and places, that history informs us of nothing new or strange in this particular..."


'Mankind: The Story of All of Us',  a popular TV series in US,  was recently shown in India on History channel. 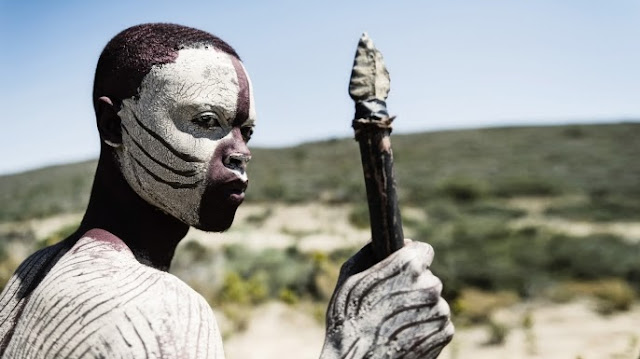 I wish I looked this good even in 21st century...

I saw its episode titled "Inventors". Its short description on the website of the channel is as follows:

"On a unique planet, a unique species takes its first steps: Mankind begins. But it s a world full of danger. Threatened by extinction, we innovate to survive–discovering fire and farming; building cities and pyramids; inventing trade–and mastering the art of war. From humble beginnings, we become the dominant creature on the planet. Now the future belongs to us."

The subject of discovering fire has always fascinated cartoonists.

Here is my pick of them. 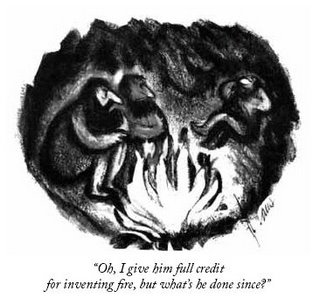 
The guy who invented the fire , no less, is relaxing and his fellow cavemen are bitching about him- "what's he done since?".

The above is easily one of the best cartoons I have seen. The cartoon is almost of the same age as me. I am so boring and falling apart while the cartoon keeps delighting.

Then making fire was not an easy skill. The guys who mastered it were perhaps hard to find. Just like today's plumbers, electricians, LPG cylinder delivery men etc. People waited for them endlessly, saying encouraging words like : 'we have to stick around' until they came. 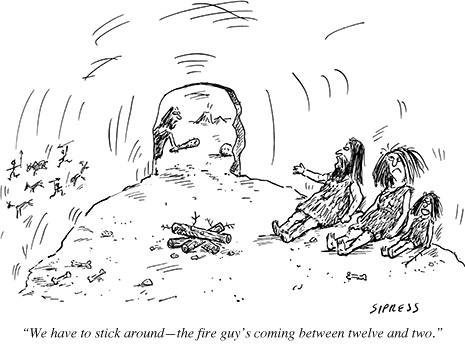