"AK47 codifies avtomat (automatic), the designer's name, Kalashnikov, and the year of its invention, 1947, deep in cold war permafrost. The rifle was not to be the fastest, most accurate, most lethal, but there would be 70m of them, and growing, because it was to be the rifle that could be dropped from heights, buried in mud, filled with sand, submerged and reassembled in minutes, and still reliably transform human beings into screams, blood and pulp."

It was widely reported in April 2012 that Edvard Munch’s “The Scream" would go under hammer on May 2 2012. It would go on to fetch $119.9 million, the highest price paid for a work of art at auction.

"...“The Scream” is one of the most disturbing images to come out of the history of modern art. It depicts a moment of psychic calamity, of shattered nerves. Munch intended, when he first created the image in 1893, to record “the modern life of the soul”; and what a fraught, anxiety-ridden vision it was. For decades his distorted vision was regarded as an eccentric by-way of expressionism, laden with Nordic gloom and unnecessary cosmic pessimism.

Yet here we are, the world’s hyper-rich leading art collectors seemingly poised to make “The Scream” one of the most valuable artistic images ever created. A vision from the haunted dusk of the 19th century has found its moment more than 100 years later. Munch has hit the mainstream. We are finally strong enough to stomach his scream. Someone, somewhere in the world is busy planning to pop this icon of human disintegration above the fireplace, at enormous cost. We are, it seems, past the age of water lilies and sunflowers. The swirling chaos and vacant expression evident in Munch’s most famous work has become a touchstone for our troubled times..." 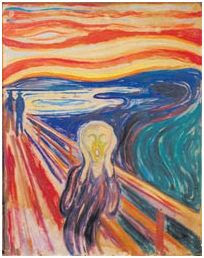 “I was walking along the road with two Friends /
the Sun was setting – The Sky turned a bloody red /
And I felt a whiff of Melancholy – I stood /
Still, deathly tired – over the blue-black /
Fjord and City hung Blood and Tongues of Fire /
My Friends walked on – I remained behind /
– shivering with Anxiety – I felt the great Scream in Nature – EM.”

"The Scream" always brings two things to my mind.

First is a famous Marathi poem called 'Tutari' (तुतारी)- the one I fell in love with as a kid after reading its first five lines- by Keshvasut (केशवसुत):

Get such a trumpet to me" 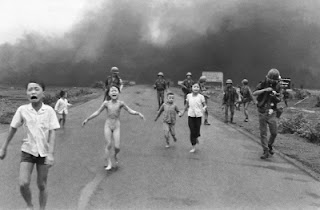 Phan Thị Kim Phúc (aged 9; middle left) running down a road near Trảng Bàng, Vietnam, after a napalm bomb was dropped on the village of Trảng Bàng by a plane of the Vietnam Air Force. The village was suspected by United States Army forces of being a Viet Cong stronghold. Kim Phúc survived by tearing off her burning clothes.

Edvard Munch talks about "The Sky turned a bloody red".

What colour was the sky over Trảng Bàng on that June day almost 40 years ago?...The colour of napalm?
Posted by Aniruddha G. Kulkarni at 9:00 AM No comments: Links to this post