The Man who saw the Sun put to sleep Anjali, Aristophanes, Agathon...

There's no reason to think that Xenophon's dull moralist or Aristophanes's comic foil is closer to the real Socrates than Plato's philosopher -- rather the contrary, since Plato was the closest to Socrates of any of them. But the three portraits are a reminder that we have no direct access to the real Socrates, whoever he was. We have only interpretations and texts, which both reveal and conceal -- just as ancient Athens has exercised such enormous sway on the imagination of the world based solely on the texts and images it left behind. (September 7 2011)

"The problem with unsuccessful stories is usually simple: they are boring, a consequence of the failure of imagination."

Philosophy need not be boring.

In a masterly essay 'Divine comedy', one of the best of the past decade for me, in Prospect May 2007, Julian Gough said:

"...In Plato's Symposium, Aristodemus, a bit pissed, has just woken up to find

'… there remained awake only Aristophanes, Agathon and Socrates, who were drinking out of a large goblet that was passed around, while Socrates was discoursing to them.

Aristodemus did not hear all the discourse, for he was only half awake; but he remembered Socrates insisting to the other two that the genius of comedy was the same as that of tragedy, and that the writer of the one should also be a writer of the other. To this they were compelled to assent, being sleepy, and not quite understanding what he meant. And first Aristophanes fell asleep, and then, when the day was dawning, Agathon.'

So was Socrates boring?

The Economist dated Dec 17 2009 in an article "Socrates in America/ Arguing to death" says:

"...The trouble was that, although his students, including Plato and Xenophon, who passed on Socrates’s conversations for posterity, saw him as noble, much of Athens did not. Instead, many Athenians detected an underlying arrogance in Socratic irony. Socrates thus resembled, say, the wiser-than-thou and often manipulative comedian-commentators Jon Stewart and Stephen Colbert in today’s America. Those who agreed with him found him funny and enlightening. The rest found him merely condescending."

Now, I will certainly prefer my Socrates like Jon Stewart!

I did NOT LIKE it one bit. It bored me to death. The only thing worse, featuring Dr. Shreeram Lagoo (श्रीराम लागू) for full length, I have seen is a Marathi film 'Jhakol' (झाकोळ) produced by Dr. Lagu himself!

My wife, Anjali, slept almost during the entire duration of it. She woke up only when very good looking Socrates, played by Dr. Lagoo, came down with a thud while calmly relaying bits of wisdom. (Later Anju would vow not to go to any play of my choice in future!)

Apart from boredom, I thought it had another problem.

"...Socrates, whose trial and death Critchley describes as marking the beginning of philosophy, could hardly have died as Plato says he did, calmly relaying bits of wisdom to his followers even as the poison gripped his veins, seeing as how hemlock tends to induce vomiting and violent convulsions as it courses through the body and stills the organs..."

(review of 'The Book of Dead Philosophers' by Simon Critchley, October 20, 2009)

In following cartoon, have Aristophanes and Agathon stabbed Socrates because he bored them? Or were they all participating in a reality TV show? 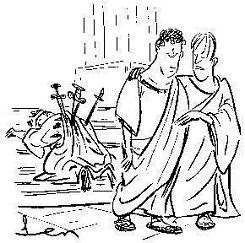 ‘Well, that’s the first part of the selection process out of the way.’ 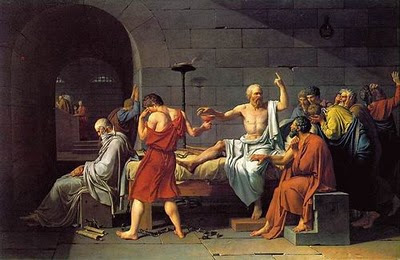 Artist: Jacques-Louis David, The Death of Socrates, 1787
Posted by Aniruddha G. Kulkarni at 9:00 AM No comments: Links to this post